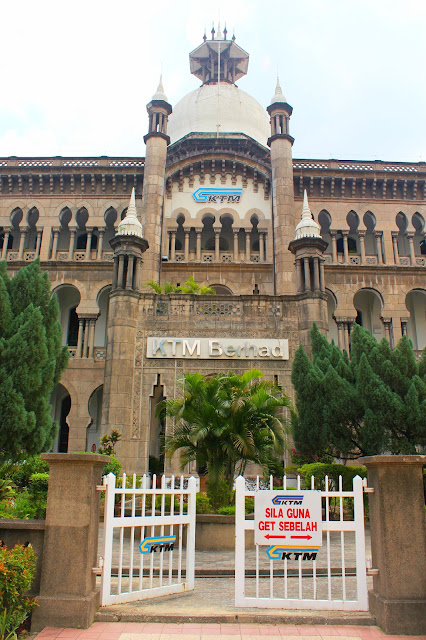 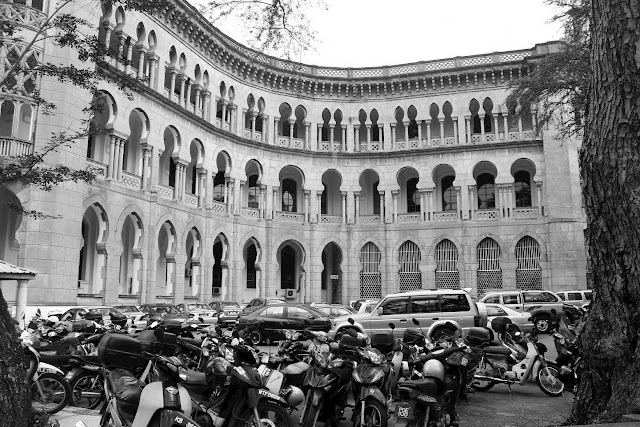 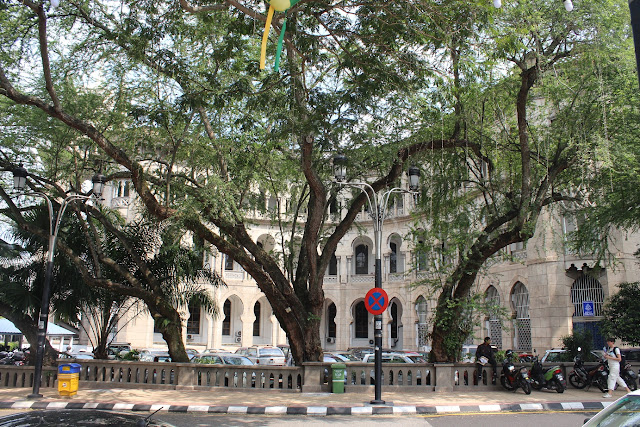 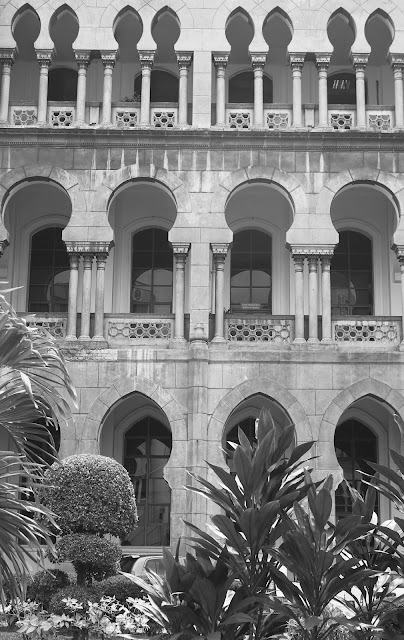 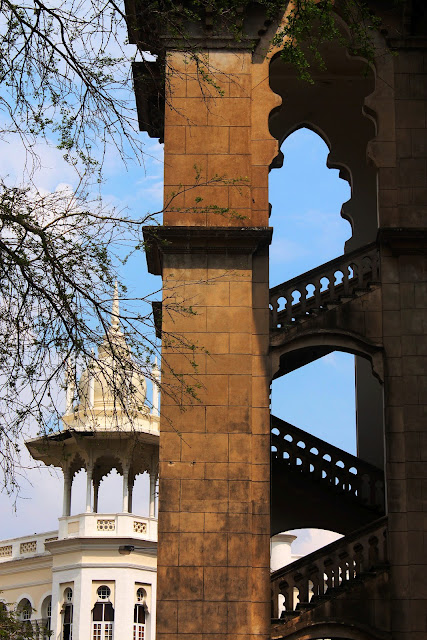 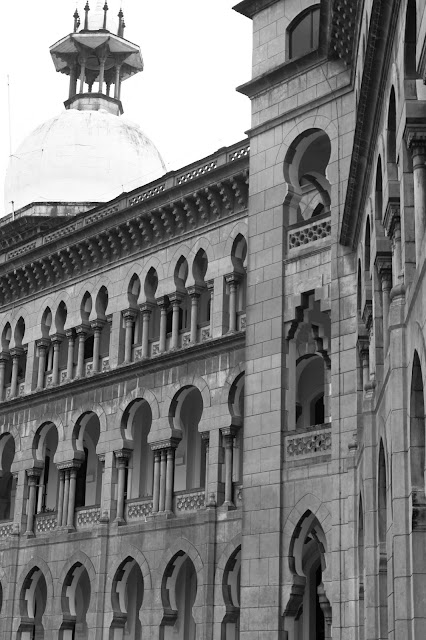 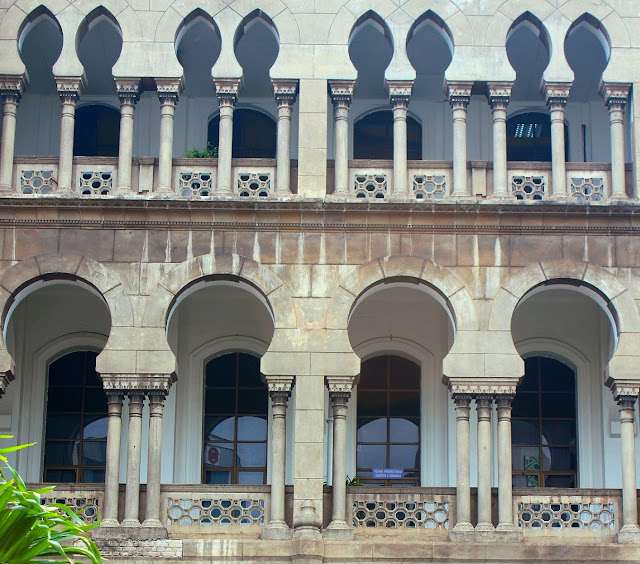 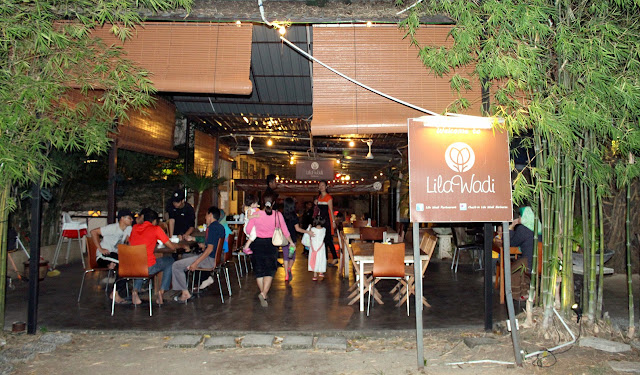 With directions over, let's get down to the dining experience! 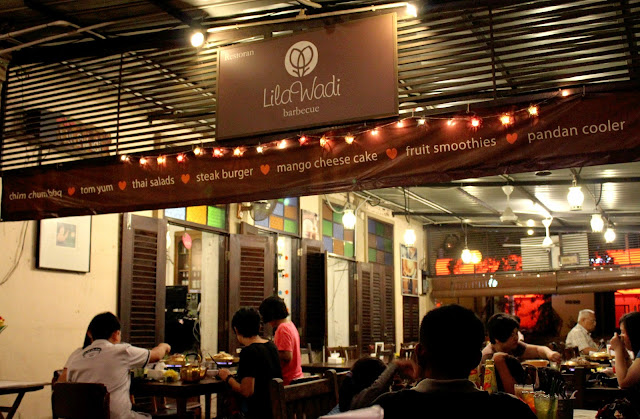 Lila Wadi is a partially open-air restaurant, so things can get out of hand if strong winds and a storm brews up. On one occasion we had to hold on to our food and drinks before they flew away!

The music playing made us feel like we were stuck in a 1920's Charlie Chaplain black and white movie! It was just terrible. And it went on for a while. We had to laugh when the music finally changed and it sounded like a piece from a James Bond movie! Whatever happened to having nice, relaxing music, something like Richard Clayderman? It would make the dining experience so much smoother and more pleasant.

However, that said, the food is great. Sharmayne loves the fish though I was disappointed that the chicken presented to us was largely made up of fat and bone. But overall, we had a lovely meal and enjoyed the dishes we ordered. 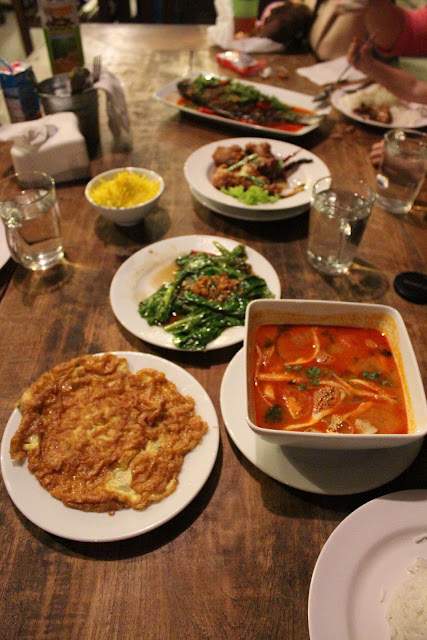 Lila Wadi is also well-known for its Mango Cheesecake, which we ordered along with the Dark Toblerone Cheesecake. They were both delightful. 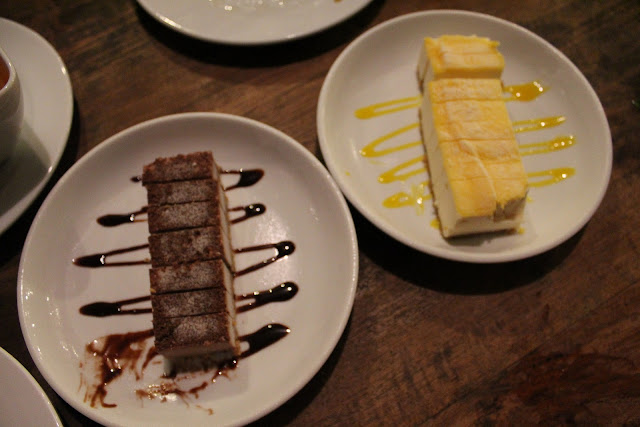 The meal which included 4 plates of rice (4 ppl) with side dishes and dessert came to a total of RM100.30. Admittedly on our second visit to Lila Wadi, we all drank water, which saved money on drinks. However, the price was very reasonable for the meal including desserts. One of the best-priced restaurants we have been to. 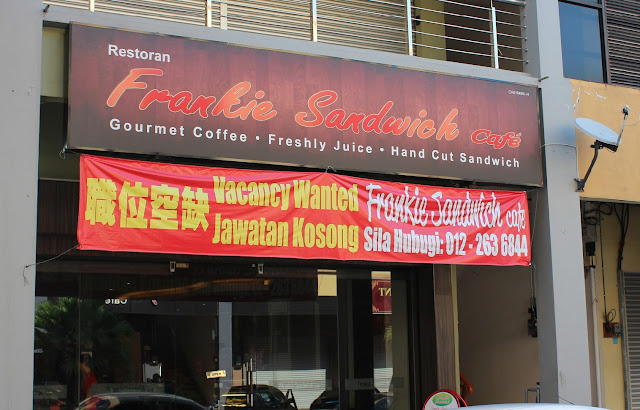 Frankie Sandwich Cafe is located in Star City, Kuantan nearby Old Town White Coffee, just along the road from the Rozel furniture place. It's easily accessible from Jalan Beserah.

First impression was good as we walked through the doors of Frankie Sandwich Cafe. The restaurant is clean, tidy and nicely arranged. Service was quick, though that was probably because we were just the second customer there. 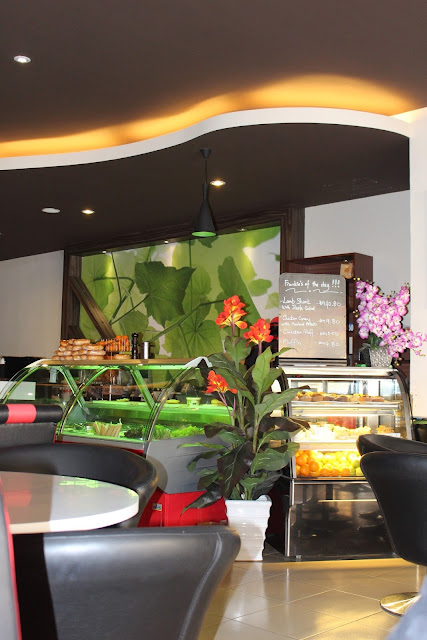 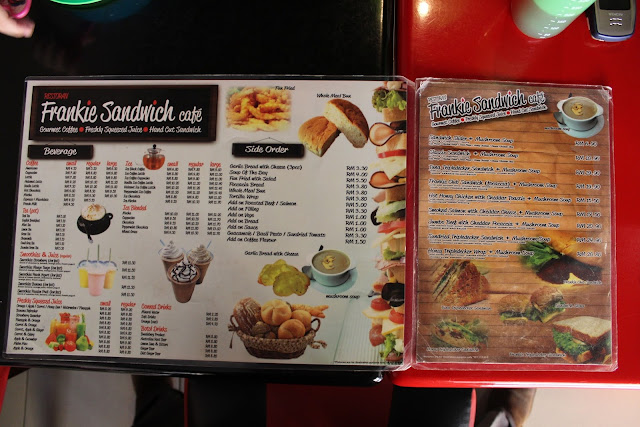 As you can see from these menus, Frankie Sandwich Cafe is quite pricey but there is a wide variety of dishes on offer. I opted for the Frankie Tripledecker Sandwich and a regular hot chocolate. 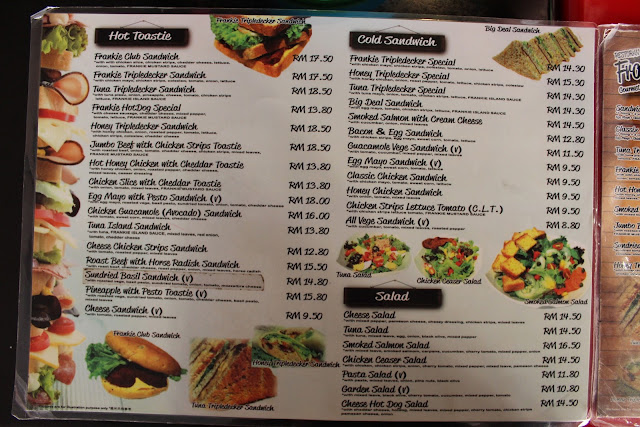 Frankie, the owner of Frankie Sandwich Cafe, came to assist us with our order and serving us our food, though he shied away from having his photo taken for this post!

Overall, Frankie Sandwich Cafe is a great place to eat but a little on the costly side - our bill came to RM107! - but well worth a visit for his sandwiches and the nice atmosphere.

Today I am introducing a new blog, a companion to *The Kuantan Blog*. It's named "Xenodocheionology" and is dedicated to my love of hotels. You can also follow along on facebook by liking my Hotels in Malaysia facebook page.

The new blog can be found by following this link:

Hope you will enjoy this new blog just as much as this one!

On our last visit to Kuala Lumpur, our friend took us out to eat dinner at Coliseum Cafe. We had never heard of this place before but soon discovered it to be a very famous spot.

(All photos taken with my ipad) 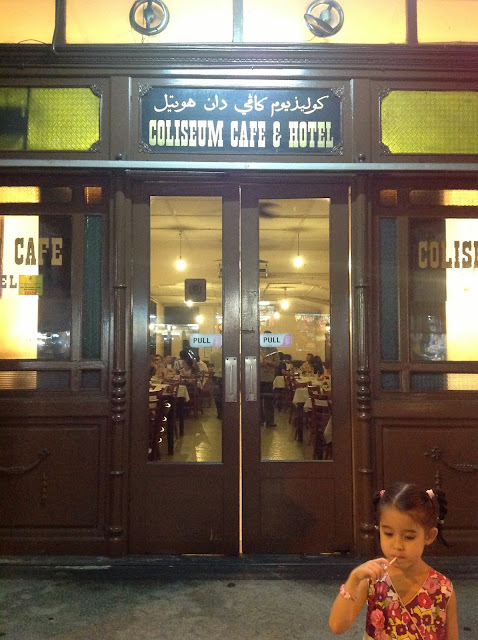 The front doors have a wild west cowboy feel to them. And what we soon found out about Coliseum Cafe is that it is an extremely old restaurant in KL, having been standing in the same location since 1921, for the past 92 years!

Some of the staff have been working at Coliseum Cafe for decades and there is a nice historical charm about the place. The Western food on the menu is also great and deserves your visit! 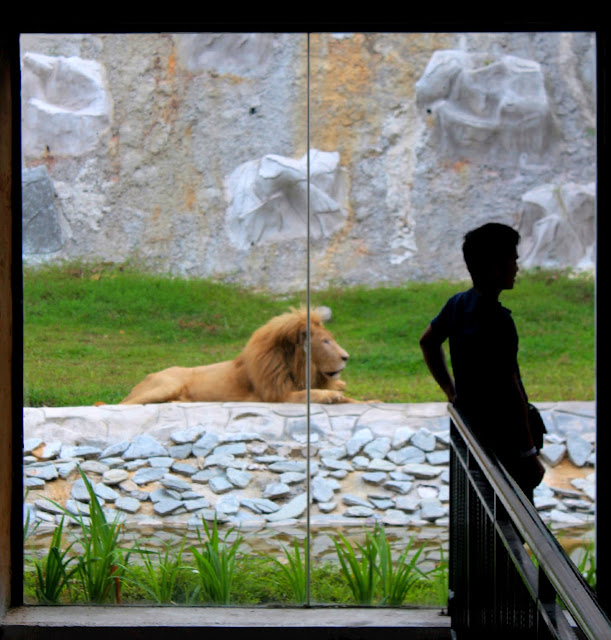 Man and Beast neatly framed;
Separated by a sheet of glass at Bukit Gambang Safari Park;
The glass causes calm; imagine the chaos if it was removed!

Bukit Gambang Safari Park has many interesting animals to see but at the date of publication (August 2013) is not yet completed, with many animals still to arrive.

Located in Gambang, around 35km from Kuantan, it can be found by continuing straight on the old road to KL from Kuantan after the turn-off to the Gambang toll. Bukit Gambang cannot be missed on the right, where the Water Park and Safari Park are a short distance inside.

We immediately went up to the second floor, where the restaurant is located, and where the lions hang out behind a wall of glass.

From the Second Floor, there are also other animals to see including turkeys, rabbits, snakes and horses, as well as the theatre where the night performance is held. More of the lions later. 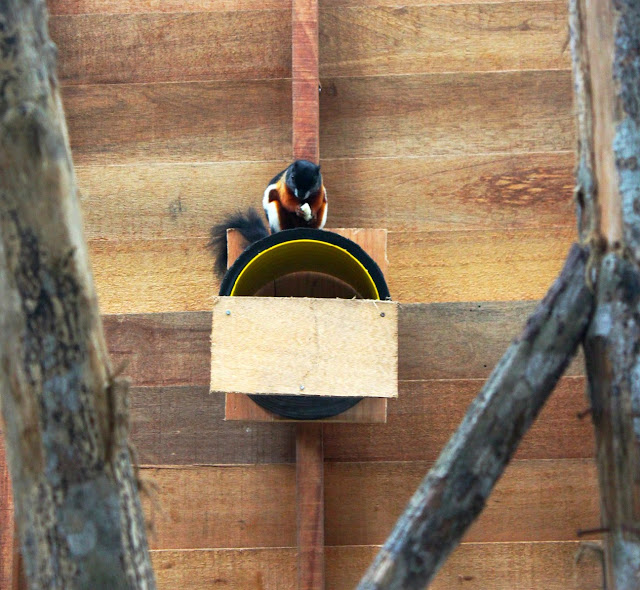 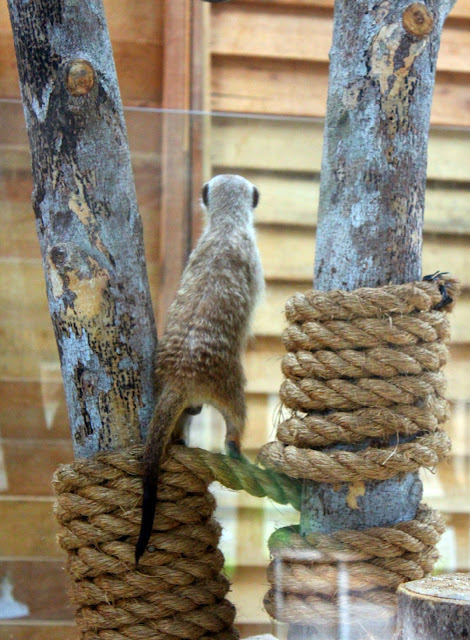 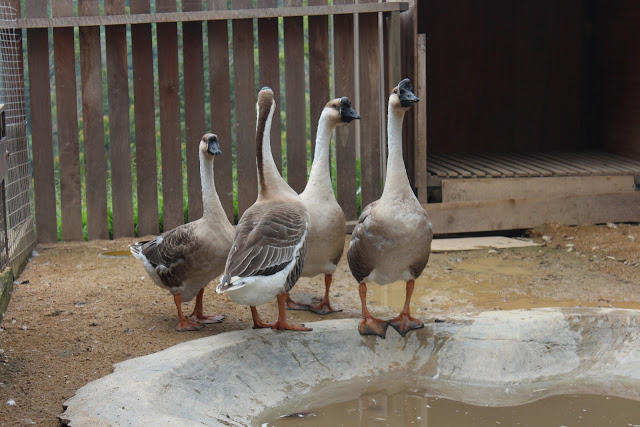 In the afternoon, we got to hold a baby crocodile and the large snake from earlier in the post. A proud moment for me!


And here we are with the snake! 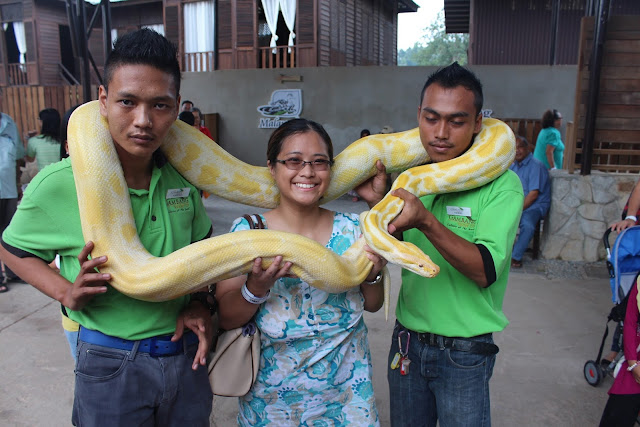 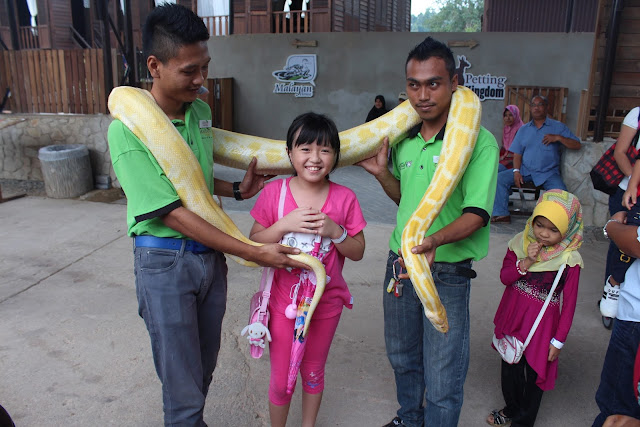 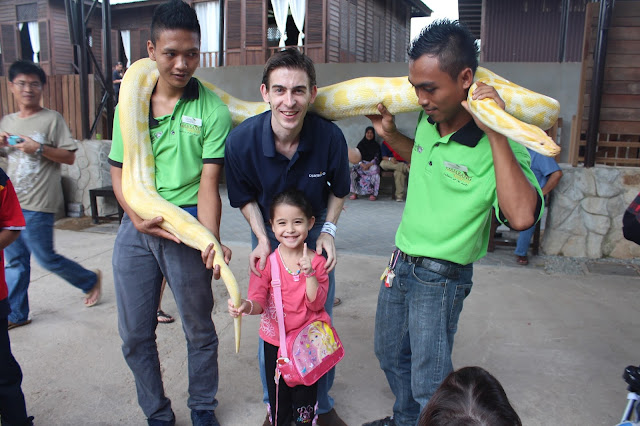 Unfortunately the auto focus on my camera malfunctioned shortly after these pictures of the lions were taken. We did take the 30-minute bus ride for the Night Safari, but it was near impossible to snap any decent photos as the bus rarely stopped and the windows were dirty. We very briefly saw some giraffes, elephants, ostriches and tigers.

Later at night we watched the night performance of Tarzan which the children enjoyed but I didn't find it funny at all and thought it was rather rubbish. The fire performance afterwards was much better. We stood and watched some guys play with and swallow fire.

Overall it was a nice day out. Will I go there again? I don't know. Perhaps when it is fully completed and all the animals are there, we might pay another visit.