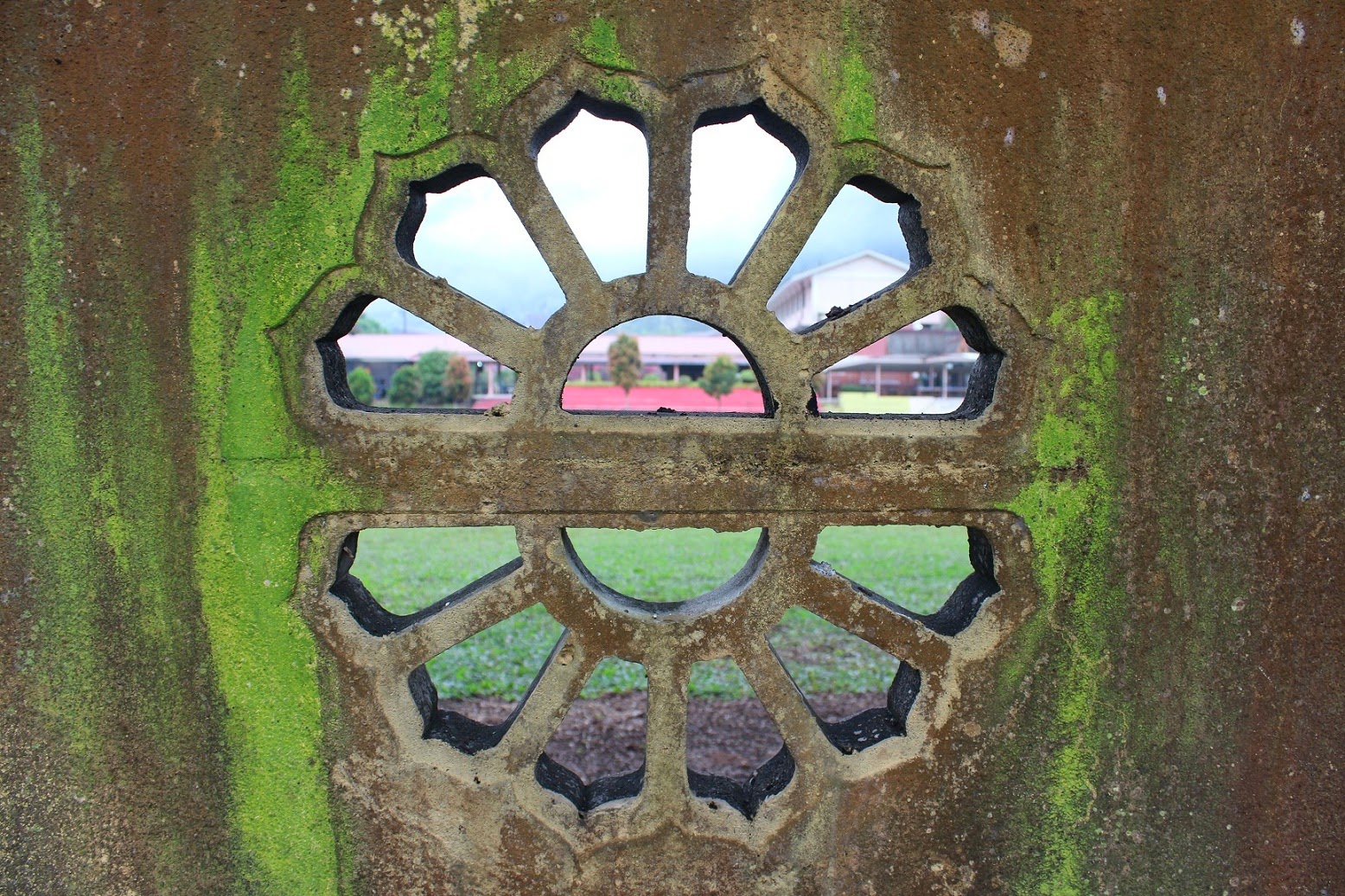 A window in a long wall running around the perimeter of SK Bukit Sekilau, a primary school in Bukit Sekilau, Kuantan. Parts of the school can be seen through the window.

Photography is a very rewarding hobby. It develops a sharp eye and helps us notice the beauty and detail all around us. Even in seemingly ordinary things like a wall. At closer inspection there is something to be photographed :) 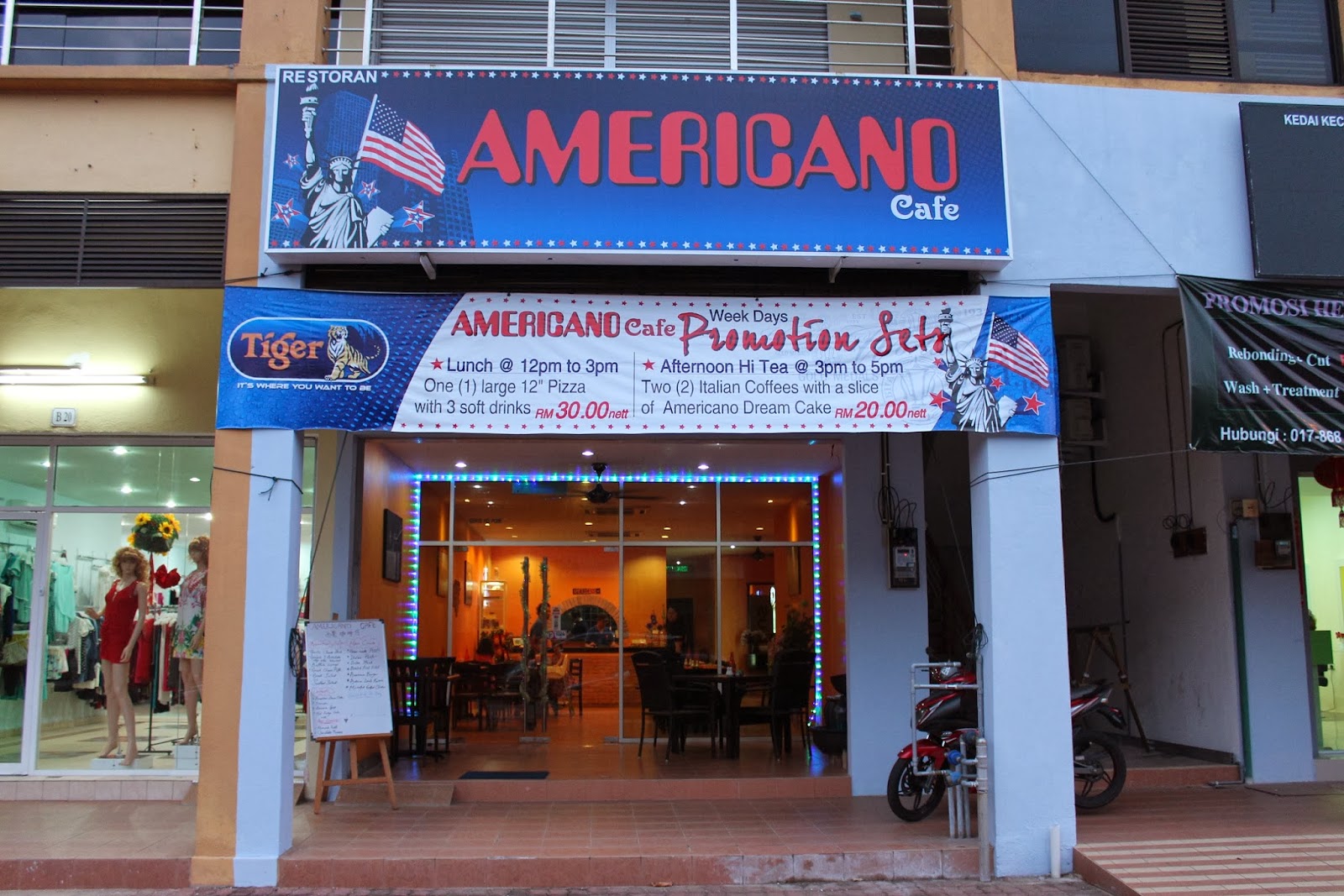 (SINCE THE TIME OF WRITING, AMERICANO CAFE HAS CHANGED NAME TO ZORBAS CAFE)

We were informed of Americano Cafe by our friend Sharon, wife of the owner. Americano Cafe is a fairly new restaurant in Kuantan, in the popular Star City area adjacent to Air Putih.

Nikolas, the owner and Head Chef, hails from Greece and has spent many years in America. Hence his food has a Mediterranean and Western flavour, and is cooked to absolute perfection. You can taste the quality. 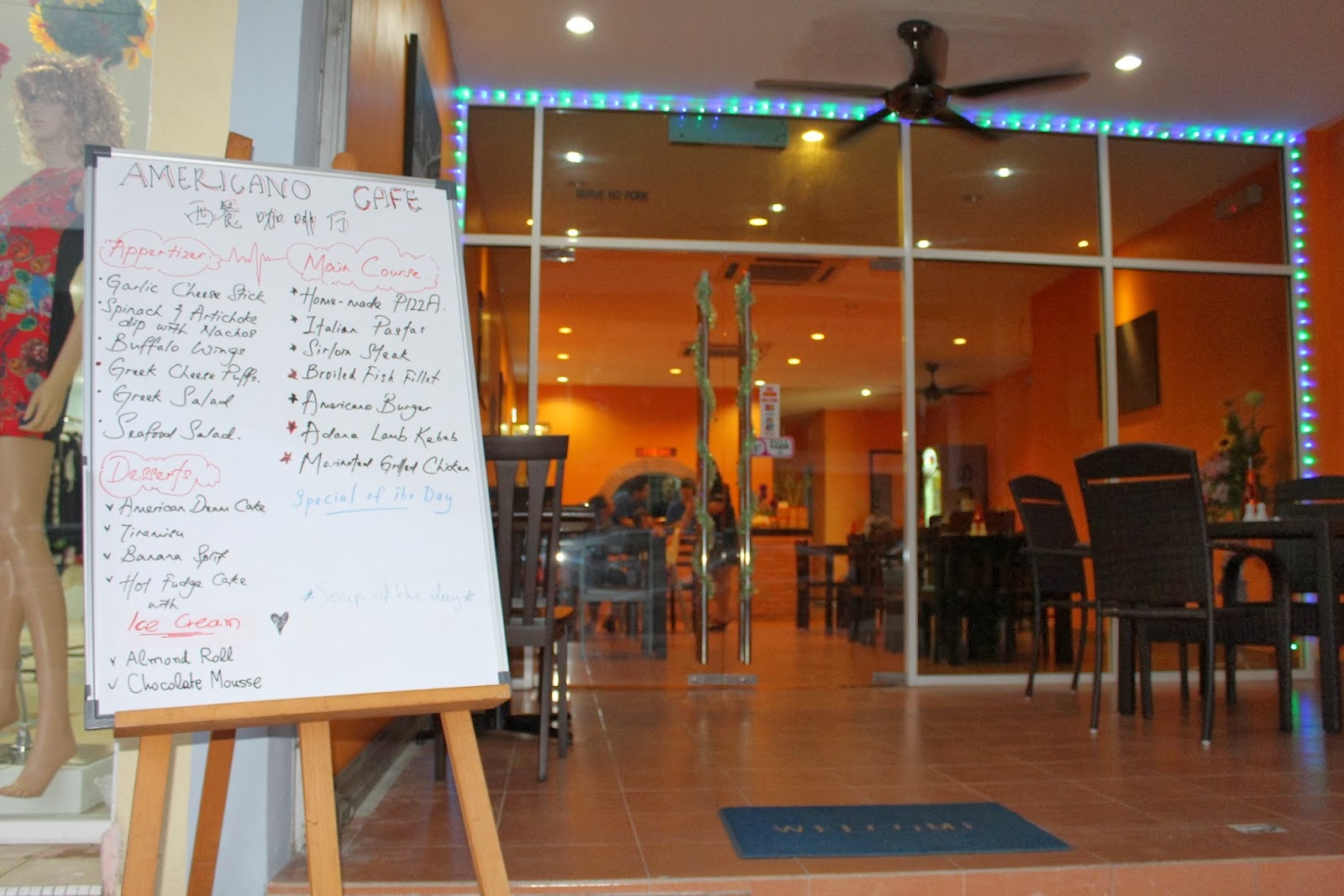 Americano Cafe is a small and cosy restaurant, suitable for families, with plenty of exciting dishes on the menu. Here's what the menu looks like:

Every single bite of every dish we sampled was delicious and prepared to perfection.

The pizza was easily better than Dominos. The salad was fresh with great dressing. The french fries were not really french fries - they were delicious chips, fat and soft. The lamb was succulent and tender. The chicken tips were awesome, my daughter loved them. All of the food was flavoured beautifully with various spices and sauces.

My daughter said, "Daddy, I'm full, but it's so lovely that I want to keep eating!"

And the dessert was no less impressive. The Belgium Chocolate Mousse was of the highest quality, luxurious, and for RM2.90, you will not find a better bargain anywhere in Kuantan for a dessert! The American Dream Cake was light and fluffy and full of flavour. Finally the Turkish Baklava. I was not very attracted to this dessert by its appearance but once I took a bite I was hooked! The most fantastic sweet flavours filled my mouth - it was just amazing!

Americano Cafe is on a par with La Casa and for me, they are the best two Western restaurants in Kuantan.

You really need to pay a visit to Americano Cafe in Kuantan. I can't talk highly enough of the great dining experience we had there. It is amazing value for money. Good prices, quality food.

The Journey from KL to Kuantan

I was travelling by coach along the East Coast Highway from KL to Kuantan in November 2013. Having made this trip many times before, I decided to document it through photographs on this occasion, showing the landscape, scenery and other interesting things.

All photos were taken on the coach with no flash. The quality is therefore not of the highest order, but tells the story of the journey I want to share with you.

Welcome to my annual post on my top 10 photos of the year. 2013 was a year in which I enjoyed my photography immensely, both planned shoots and impromptu snaps. At one stage I had 85 photos nominated for entry into the top 10! After deep thought and analysis, here are the best:

10. The days of real sunsets appear to have dried up in Kuantan as compared to several years back when they occurred almost every week. The irregularity of the sunsets made this particular evening extra special. Standing on my balcony I allowed the apartment block, hill and neighbouring balconies to act as a frame in silhouette. And the colours and texture of the clouds with a couple of strips of blue and a golden horizon just speaks for itself. One of my very favourite sunset photos of all time! 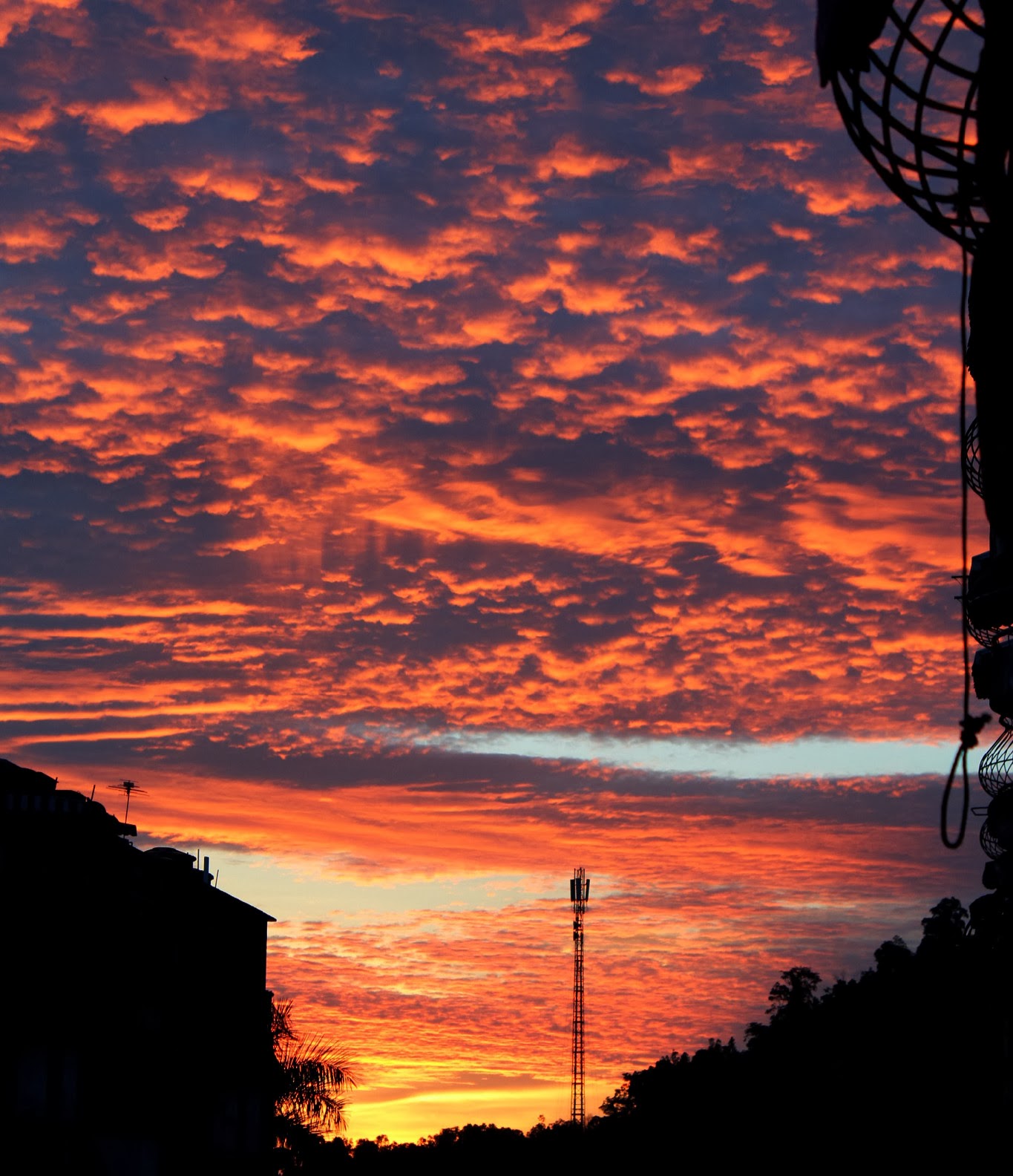 9. This was an instance of discovering something different to what was initially expected. Here at the KL Orchid Garden we were surrounded by a plethora of beautiful orchids growing from the floor, hanging from baskets, lining shops. I went to gaze at a small pond when this pink dragonfly appeared from nowhere and decided to stay put. Slowly preparing my camera I tried to limit my movement as much as possible so as not to alarm this beautiful specimen. I was praying he wouldn't fly away as has happened so many other times. My prayers were answered and I shot several photos of this dragonfly as he perched on this tiny branch.

8. The more I look at this image the more I love it. I had wanted to snap a picture of the cable car that ascends and descends the slopes of Genting Highlands. Unwittingly I also captured the other modes of transport that operate in getting people up and down Genting Highlands - bus, car, taxi. Genting is famous for hotels, the casino and the theme park, among others, in addition to refreshingly cool temperatures. In this photo you can really get a sense of the incline on this steep and winding road. It is also very dangerous, particularly at night and in wet conditions. Shortly after our visit here, a bus full of people tragically lost control while descending, and fell down a ravine, resulting in a number of fatalities. This photo stands as a reminder of the real perils of the road to Genting Highlands. You can never be too careful. 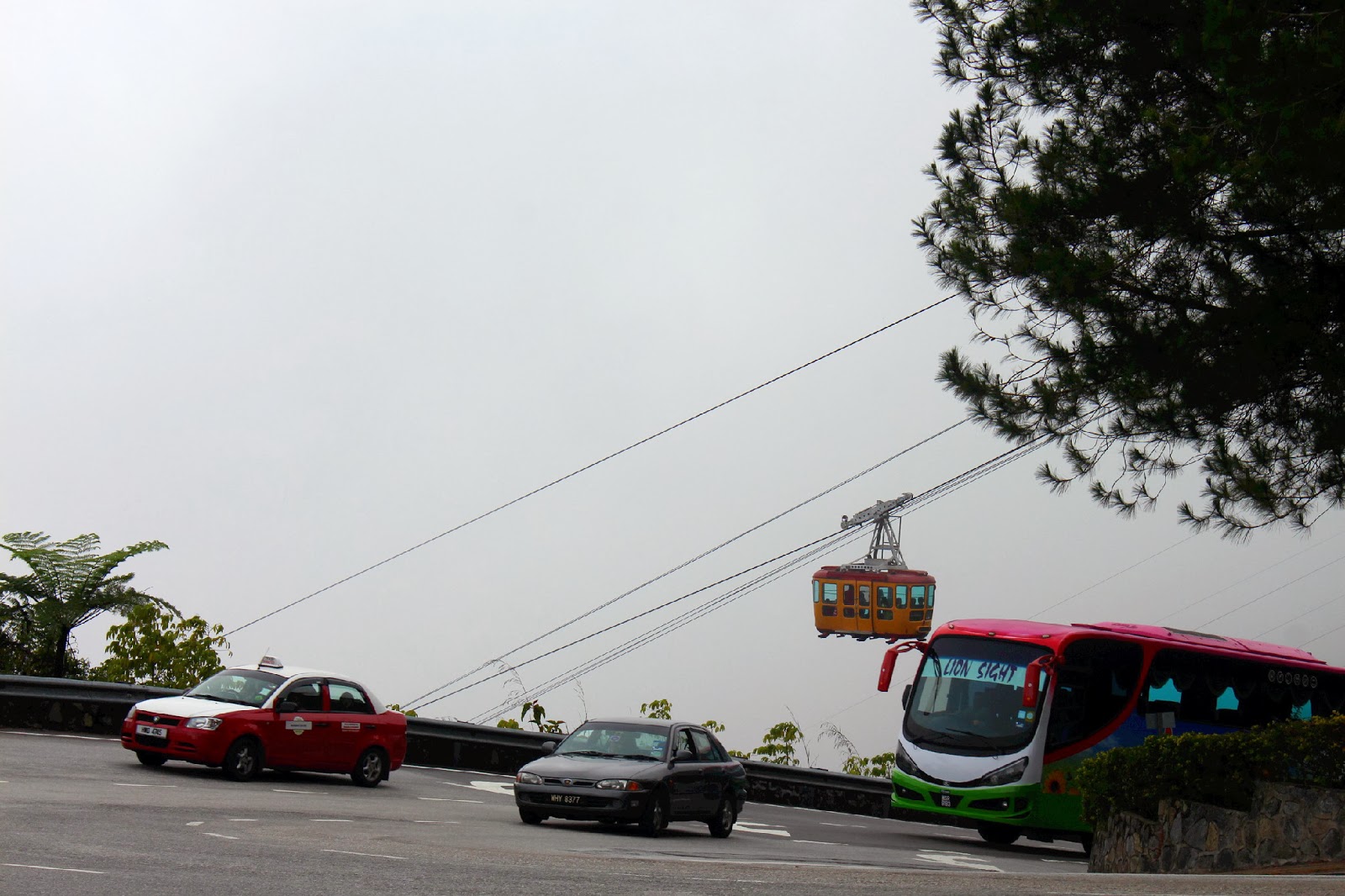 My youngest daughter does not enjoy smiling for the camera, though that can be worked around. This image in at #7 shows that a smile is not always necessary in a great photo. I managed to capture her deep in thought, reflective and somewhat poignant. As to what exactly was going through her head, only she knows. What do you think was on her mind? 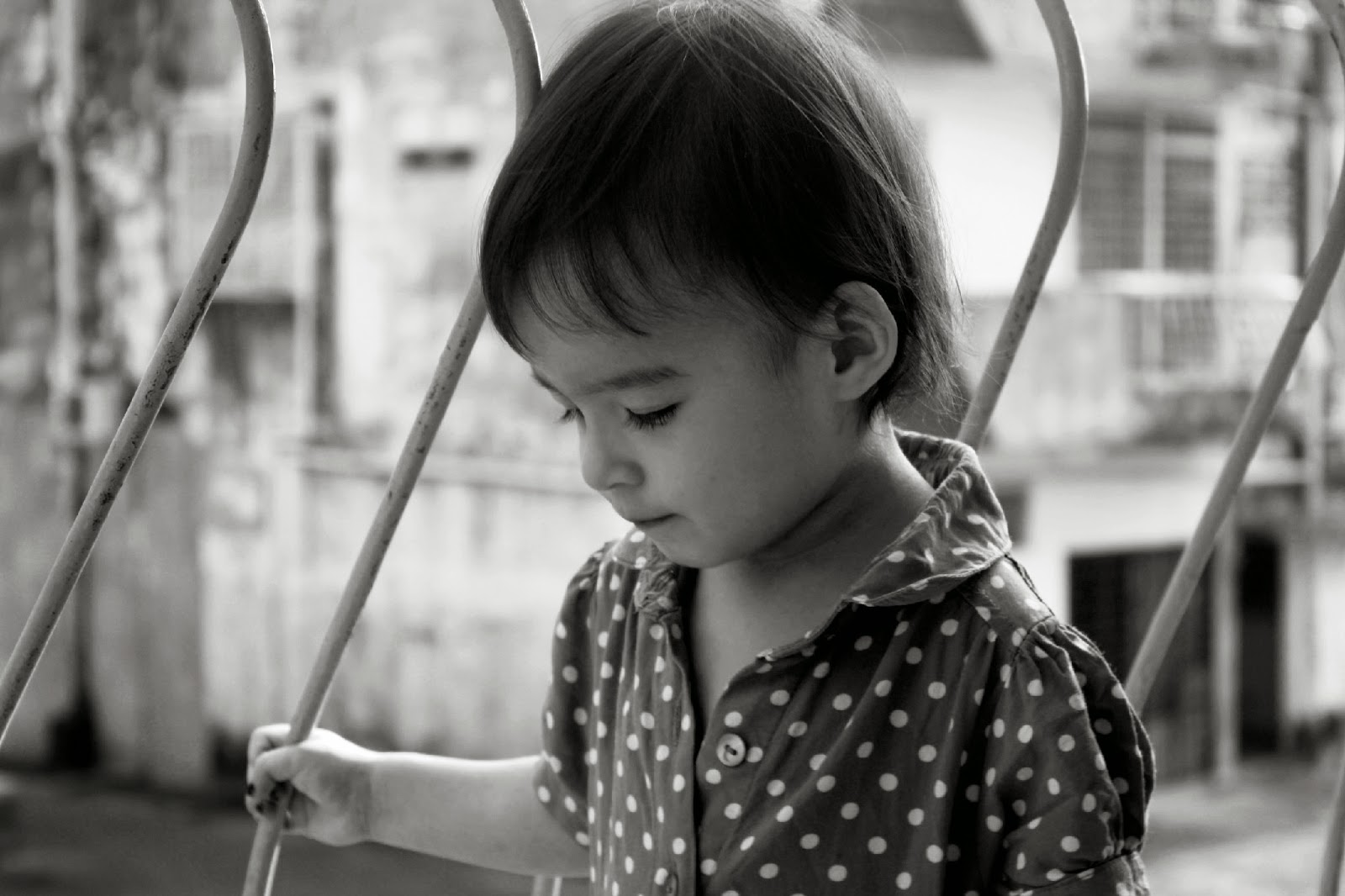 6. Clicking away at the KL Butterfly Park, I took A LOT of photos, including this image of a dragonfly perched on a leaf. I decided to squat down and shoot this one from below, but it didn't stand out in particular from any other images. It was only when I got home and hooked it up in Photoshop that I managed to blacken the background, and it really stood out. I love the transparent wings, the alien-shaped head and the triangular leaf it sits on. Check out the amazing human-shaped face too! Sometimes, a little Photoshop can produce a lot of good! 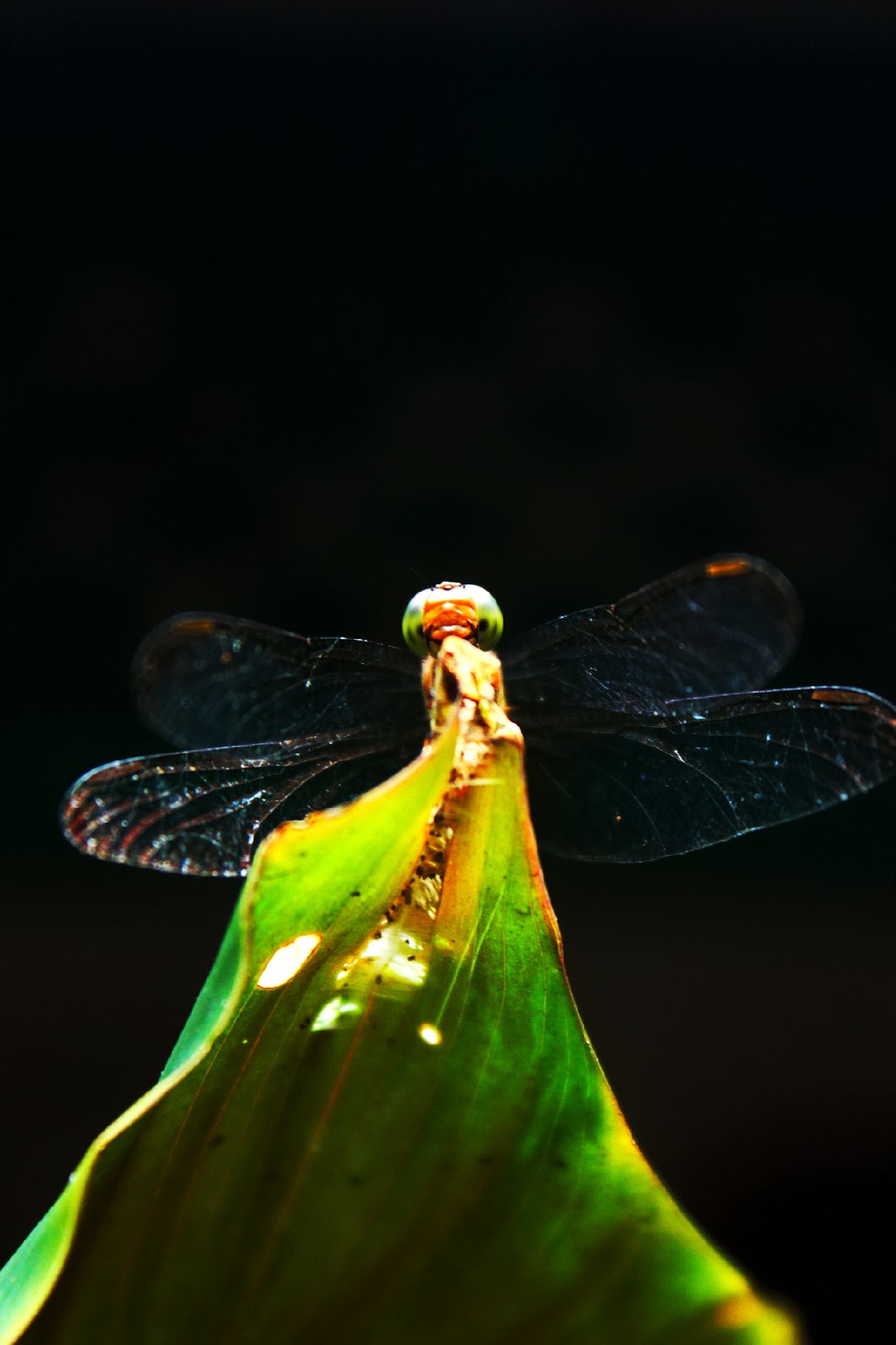 5. As I peered out of the hotel window to see the KL sky at night, I noticed one of the few rooms with the lights on and curtains open. There was also a lady standing by the window sending a message on her phone. It was an opportunity I had to take, and it turned out to be one of my favourite images of the whole year. The dull white walls of Vistana Hotel are complimented by the illuminated KL Tower beside, and contrasted by the sole human form in between. 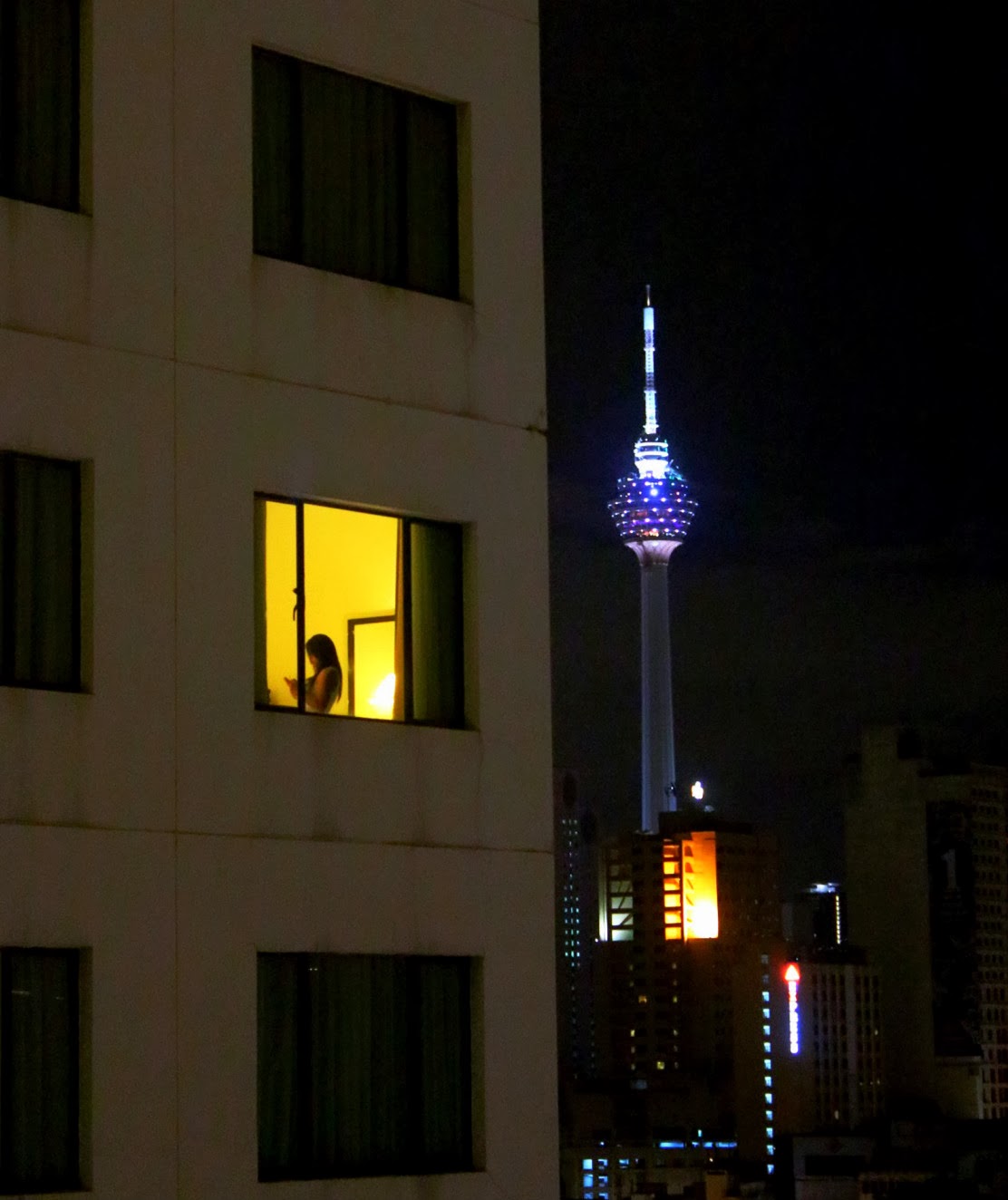 4. The Exterminator. On a sunny Saturday afternoon in 2013 we were evacuated from our apartment as health officials came to do their business in response to a case of dengue fever. The Exterminator was thrust into action. This powerful gun emits mosquito repellent in billowing clouds of destruction, smothering the outside surroundings, the underground drains and inside every apartment. Dengue fever is a serious concern in Malaysia, which is heightened as irresponsible individuals casually throw litter in drains, causing a build-up of stagnant water. Mosquitoes' favourite conditions to breed. We stood outside watching the scene unfold as the loud whir of The Exterminators filled the cloudy air. Young children were afraid; I snapped away with my camera. Yes, there are opportunities for photos in every situation; opportunities to create an image of time which tells a very important story; opportunities which can create awareness in otherwise unconcerned or ignorant minds. 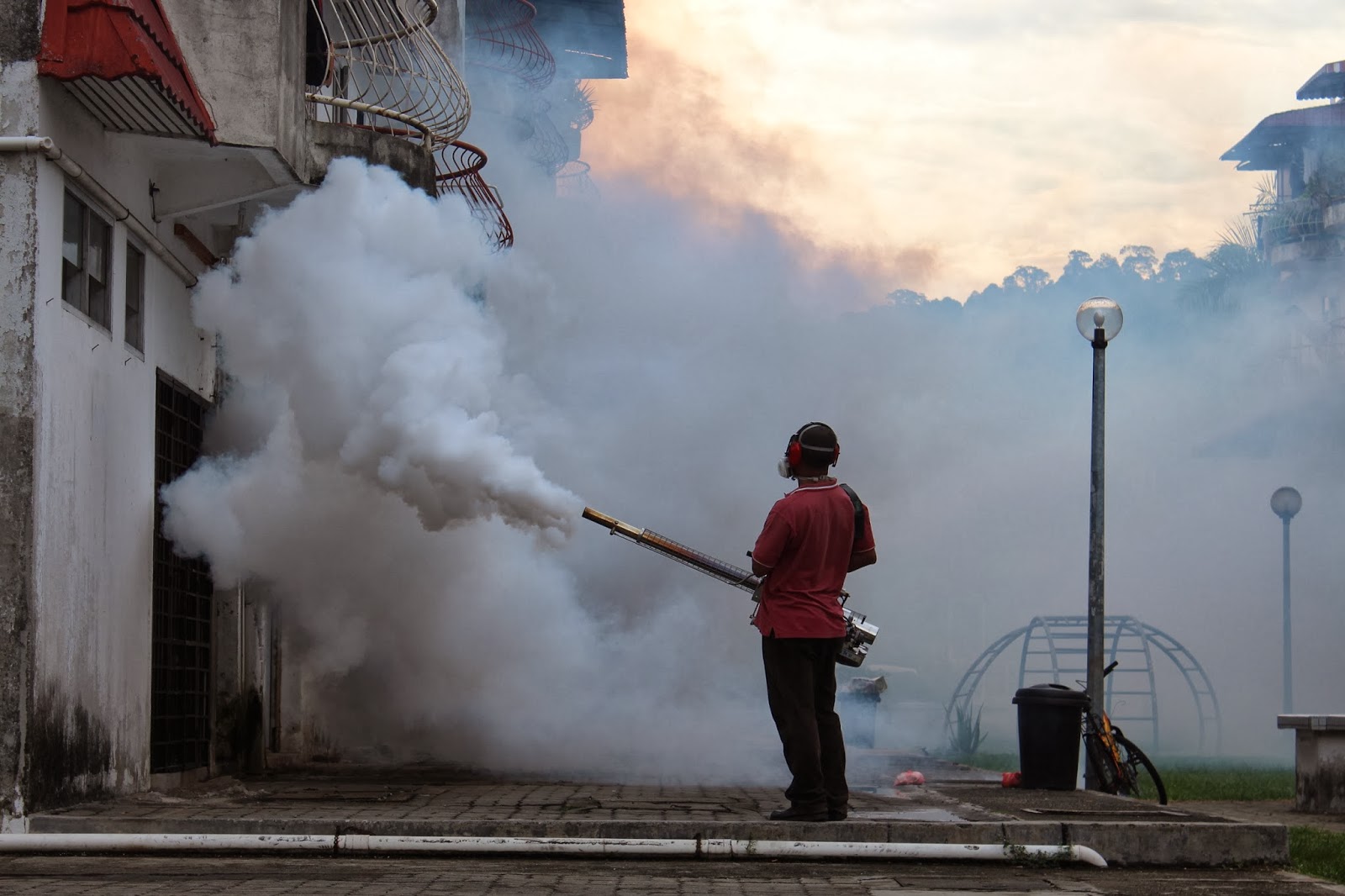 3. I have gained a lot of great photos by simply walking out onto my balcony. All manner of bugs, birds and dragonflies have temporarily set base here. One evening in 2013 I noticed another marvellous visitor to our balcony, its colourful and perfectly decorated body sitting still on our lavender plant. These are the grasshopper's hind legs in an upright position, resembling the shape of the Petronas Twin Towers, while a front leg clutches a tiny branch to the right. The soft blue background portrays the first glimpse of dusk. 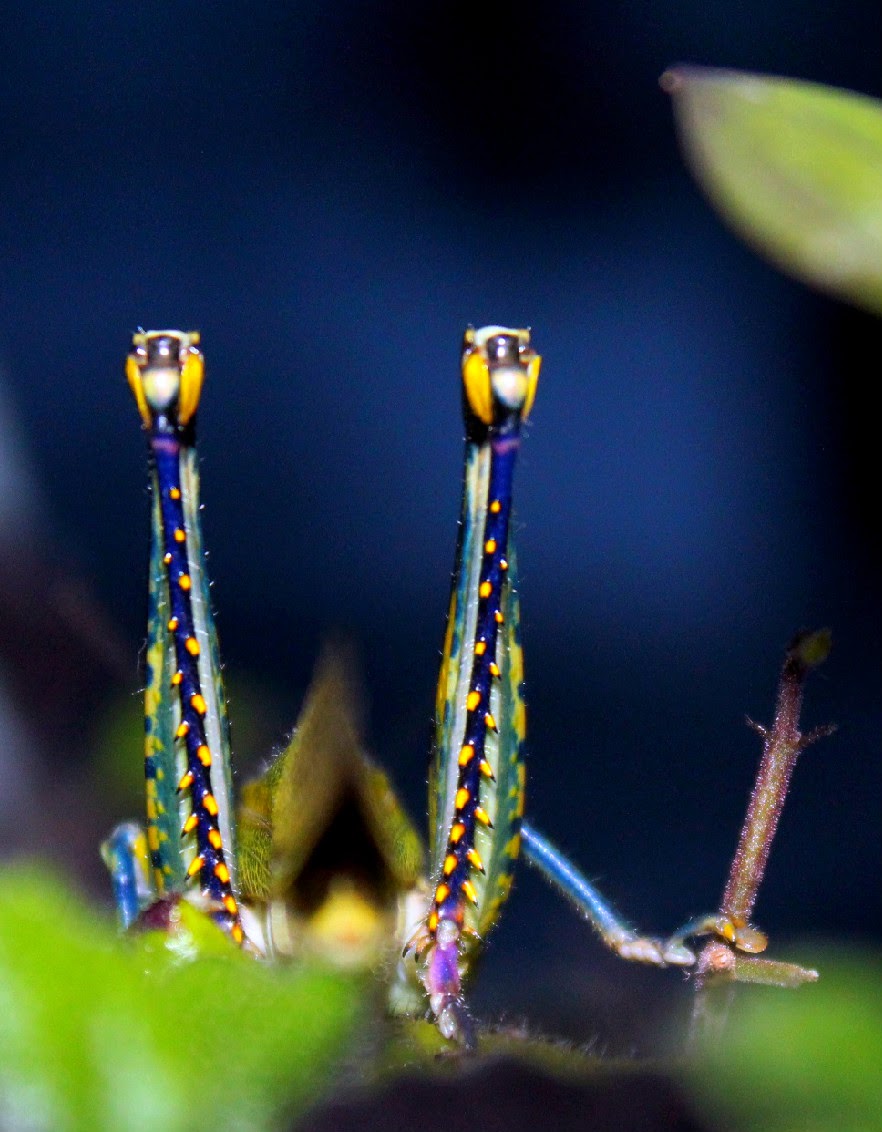 At #2 is this photo taken at the Bukit Gambang Safari Park of the lion enclosure. One piece of glass separating man from animal. Everything is at peace because of the existence of this window. This was an opportunistic moment where beast and human aligned perfectly, facing the same direction. I love the contrast between colour and silhouette. The window provided the perfect frame to the picture. The handrail coming closer to the viewer gives a depth to the photo which I find stimulating. Incidentally, this was one of the very last photos I took before the focus on my camera busted and went to KL for repairs. 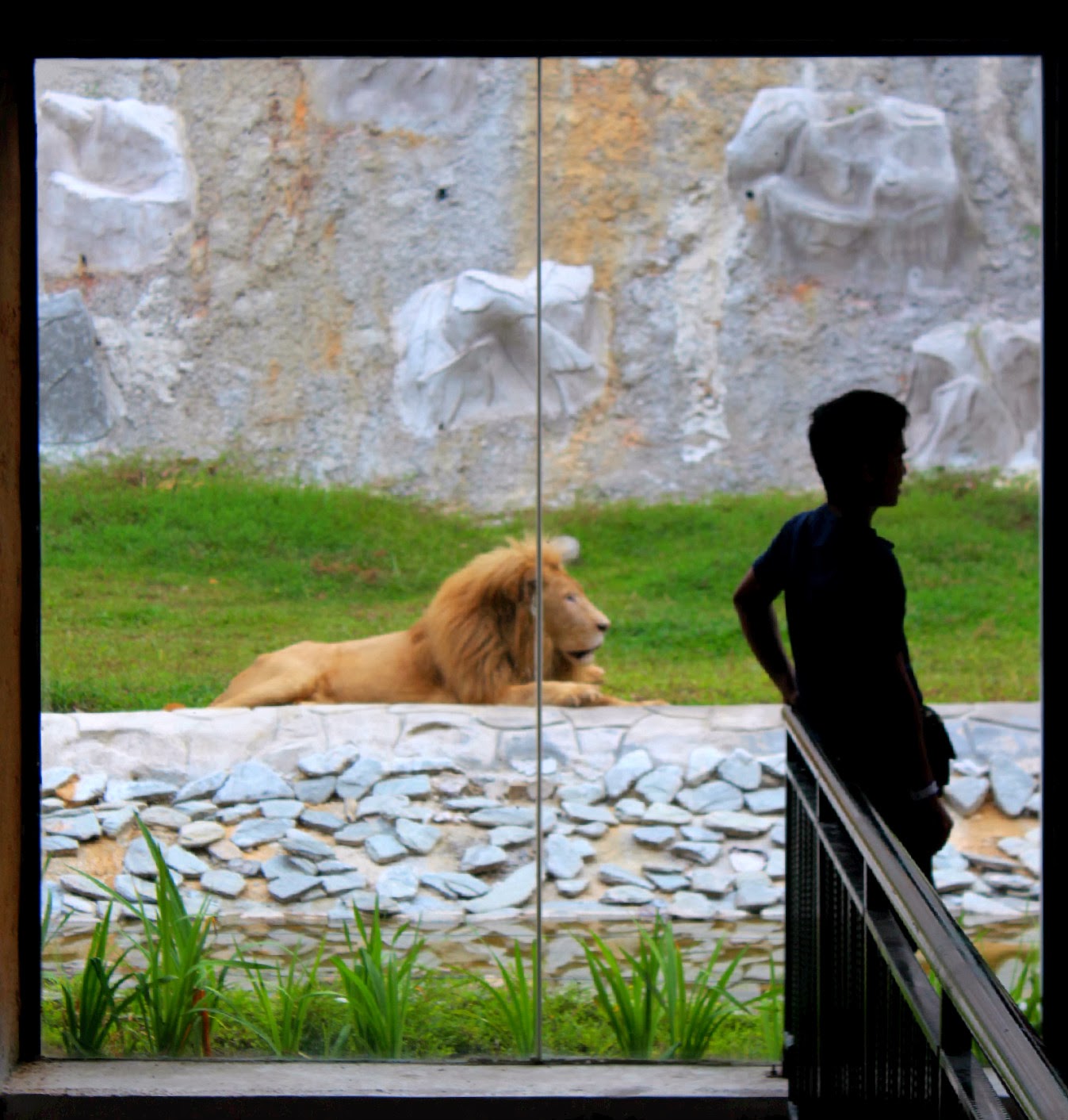 1. So this is my favourite photo of 2013. Welcome to the outer courtyard of Masjid Negara (National Mosque) in KL. Notice the intricate Arabic characters on the wall to the right, the almost flat pointed roof of the mosque, and the distinctively Islamic patterns on the wall and ground. What I love the most is the Muslim woman in traditional baju kurung and tudung, purposefully striding across the grounds. 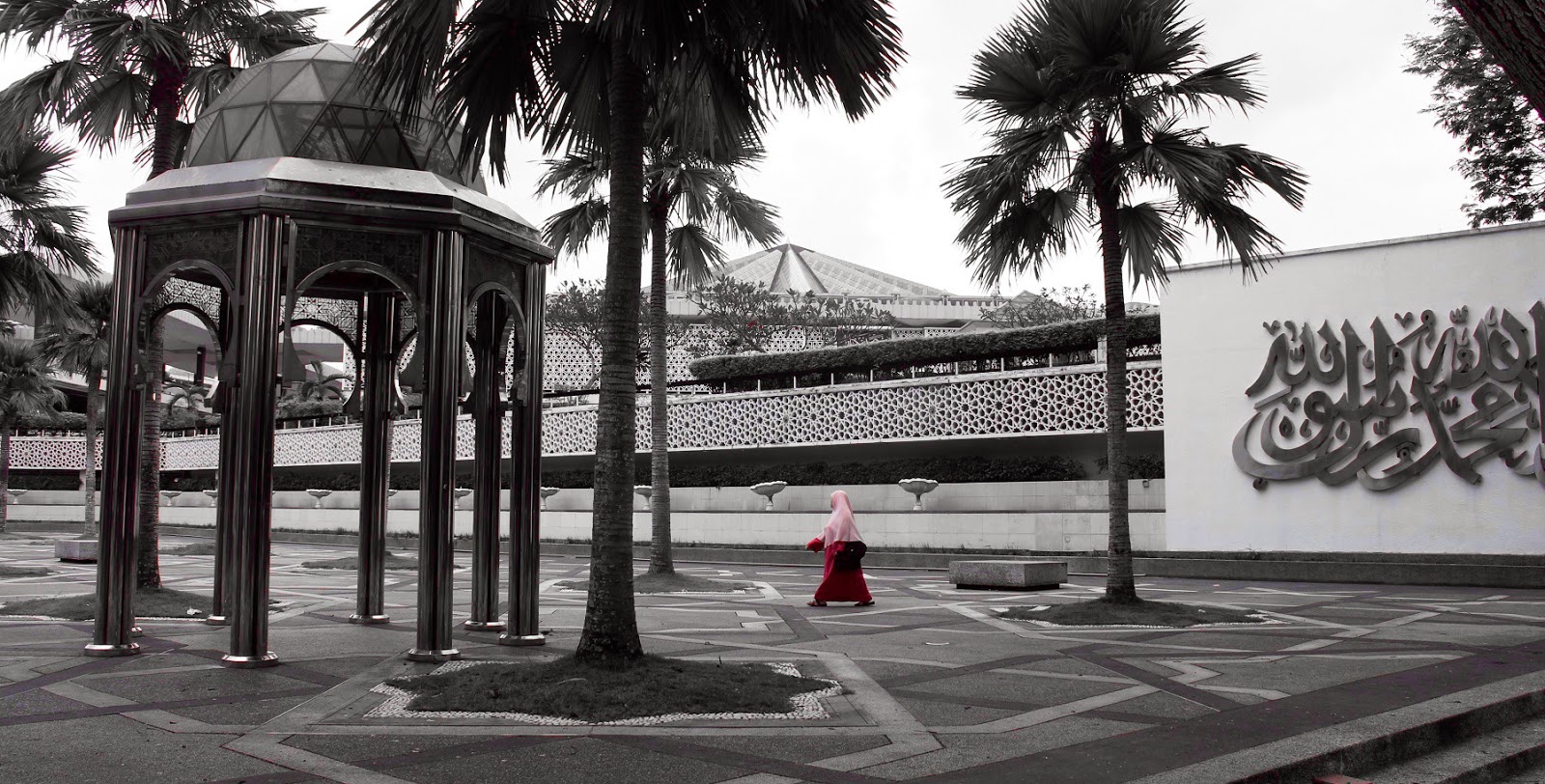