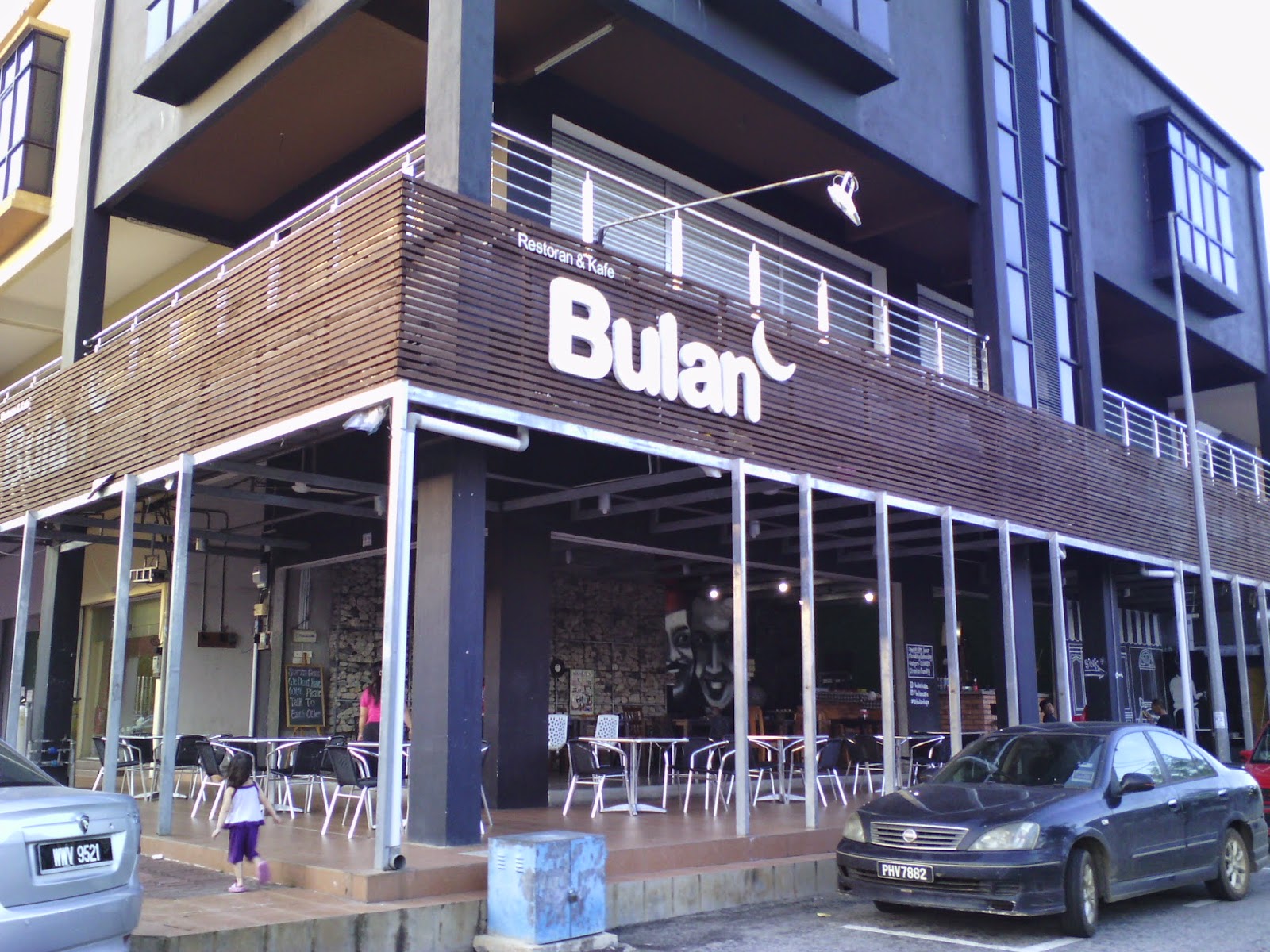 Located on a corner lot off Jalan Beserah in Star City, Bulan restaurant operates from evening until night, specialising in a wide range of western food.

This was our first time trying out Bulan restaurant, and we were not disappointed. Apart from a quite severe toothache I encountered while chewing some food, everything was great.

Guests immediately come face-to-face with this charming little signboard with a message to make you smile. We went ahead and used the data connection on our phones anyway!

The menu had some very entertaining pages with fun names of certain dishes, like 'Single but Available' and 'English Man Sausage.' 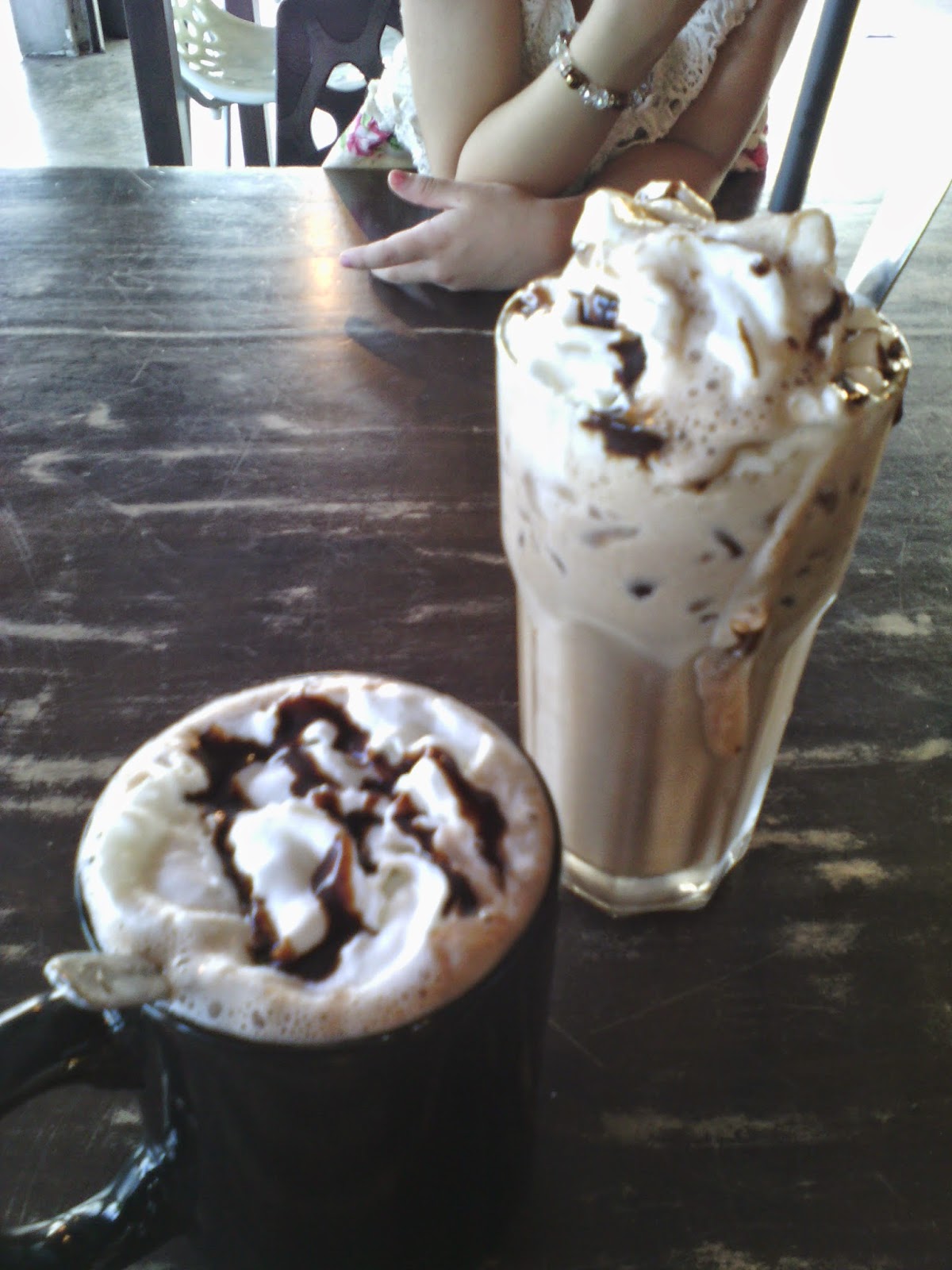 Bulan restaurant is clean and attractive and the food is of a good quality. The prices are quite reasonable for western food.

Bak Kut Teh @ 888 Food Court, Kuantan; under the bridge, Klang

I didn't try bak kut teh until several years into my life in Malaysia. I am not sure why, but I have definitely been missing out on one of the great foods Malaysia has to offer. The best bak kut teh we have found in Kuantan is located at 888 Food Court, which is situated just behind Vistana Hotel Kuantan, a little way down the river.

A friend took us for another bak kut teh 'under the bridge' in Klang, a famous restaurant serving delicious food.

The price here for my wife and I comes to around RM25, which is a reasonable price for this great food which we finish every time, and leaves us fully satisfied.

A tip for eating here is come early! By 8pm it will be finished, and if you do come late, you may well be disappointed.

Here's a quick before and after of our bak kut teh. Safe to say we finished it all and thoroughly enjoyed it!

That was really satisfying. Would definitely return under the bridge when I'm in the area again!

I know it's a little late but I wanted to include this post as it was a first for me. 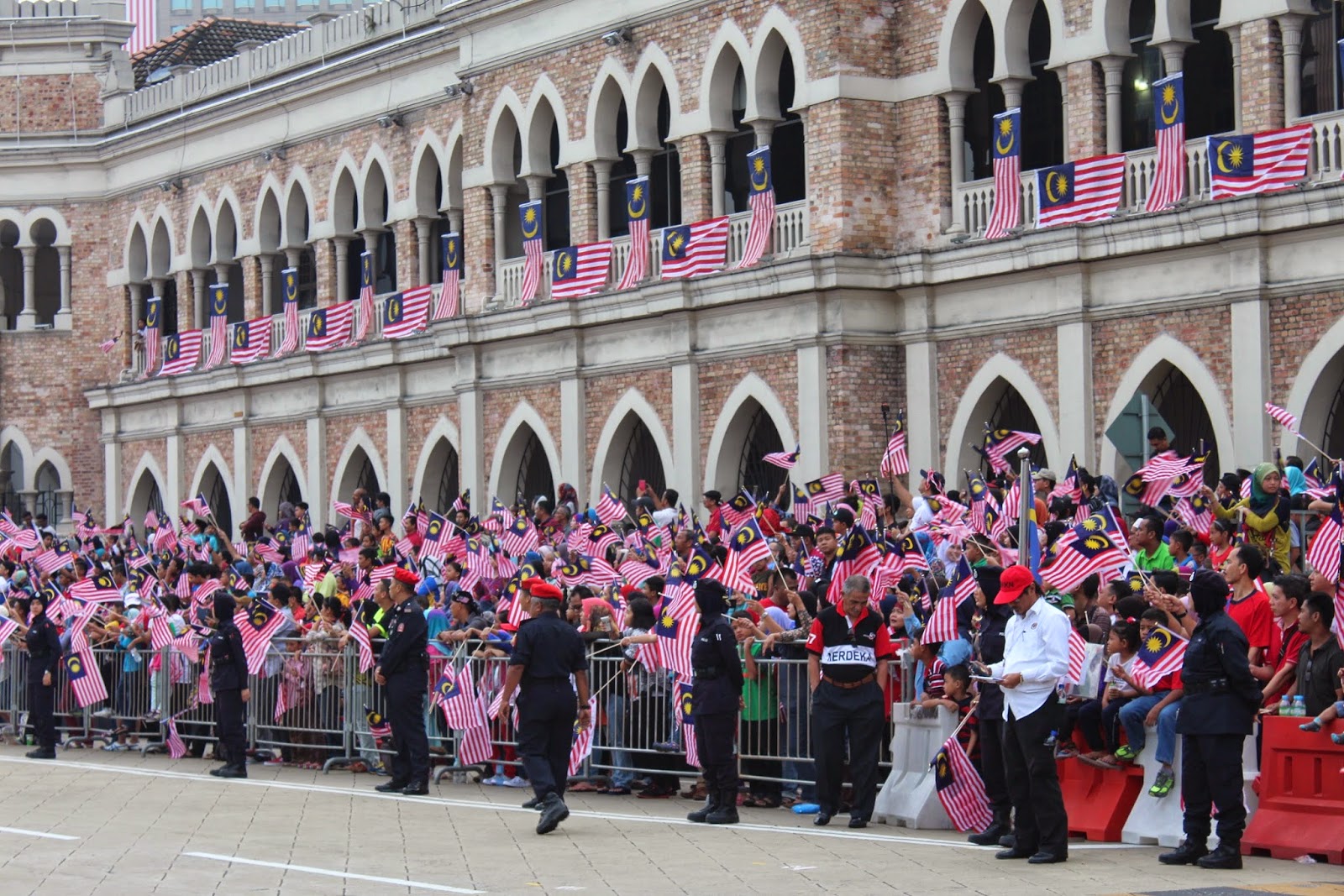 It was the first time I was at Dataran Merdeka to see the merdeka parade. August 31st is Malaysia's Independence Day, and each year a parade goes through Merdeka Square.

We were staying at The Majestic Hotel which is just 10 minutes walk from the venue. I woke up early, around 6am while the others were fast asleep. I wasn't planning on walking right down to Dataran Merdeka; just thought I'd watch them all go by the hotel.

I watched a barrage of tanks make their way past the hotel amidst much din. Quite impressive. 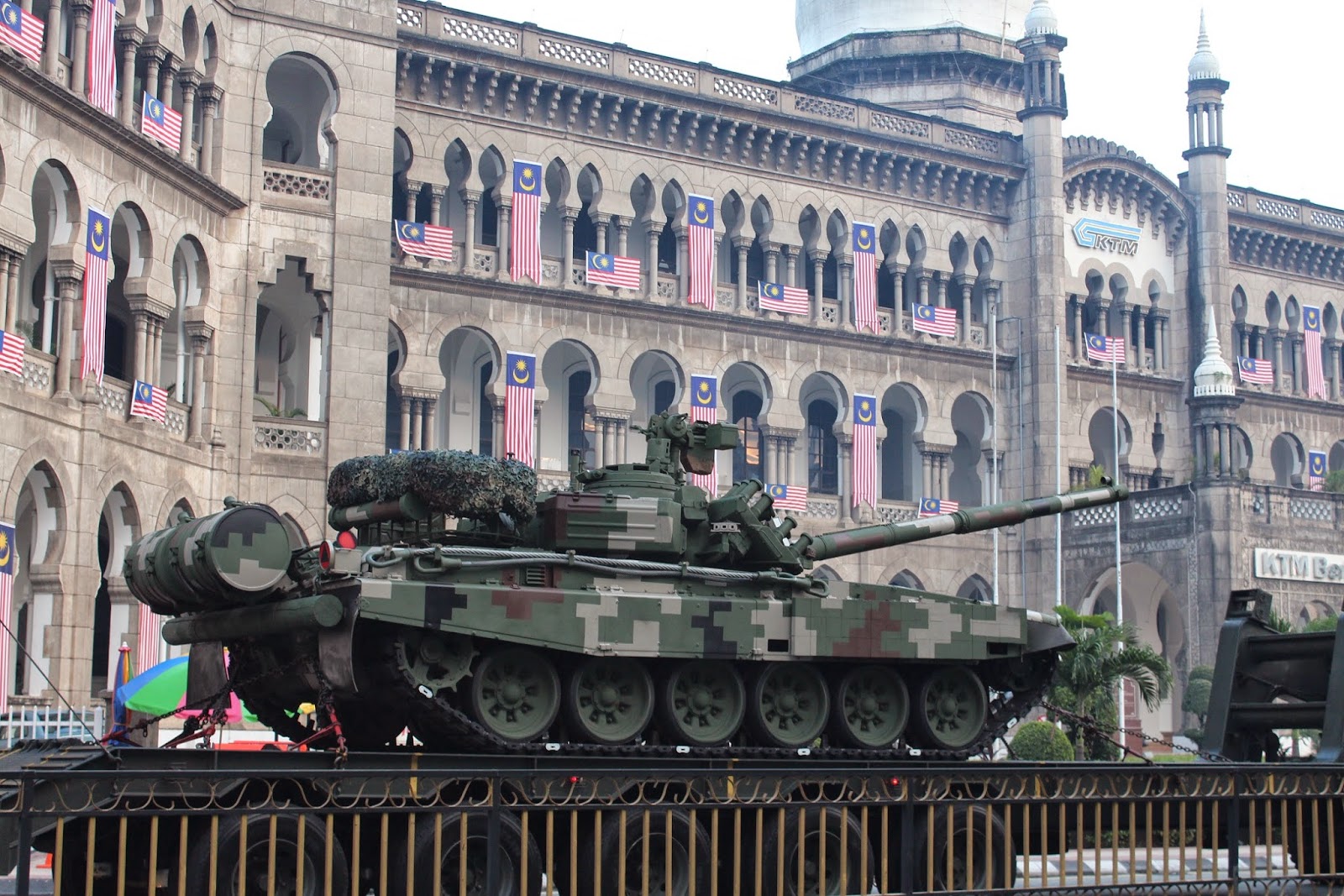 I followed the line of tanks down the road until I reached Dataran Merdeka. While the machinery was impressive, I was not so proud of the sight of soldiers in and around the tanks smoking away on cigarettes. Anyway, that's a different story... 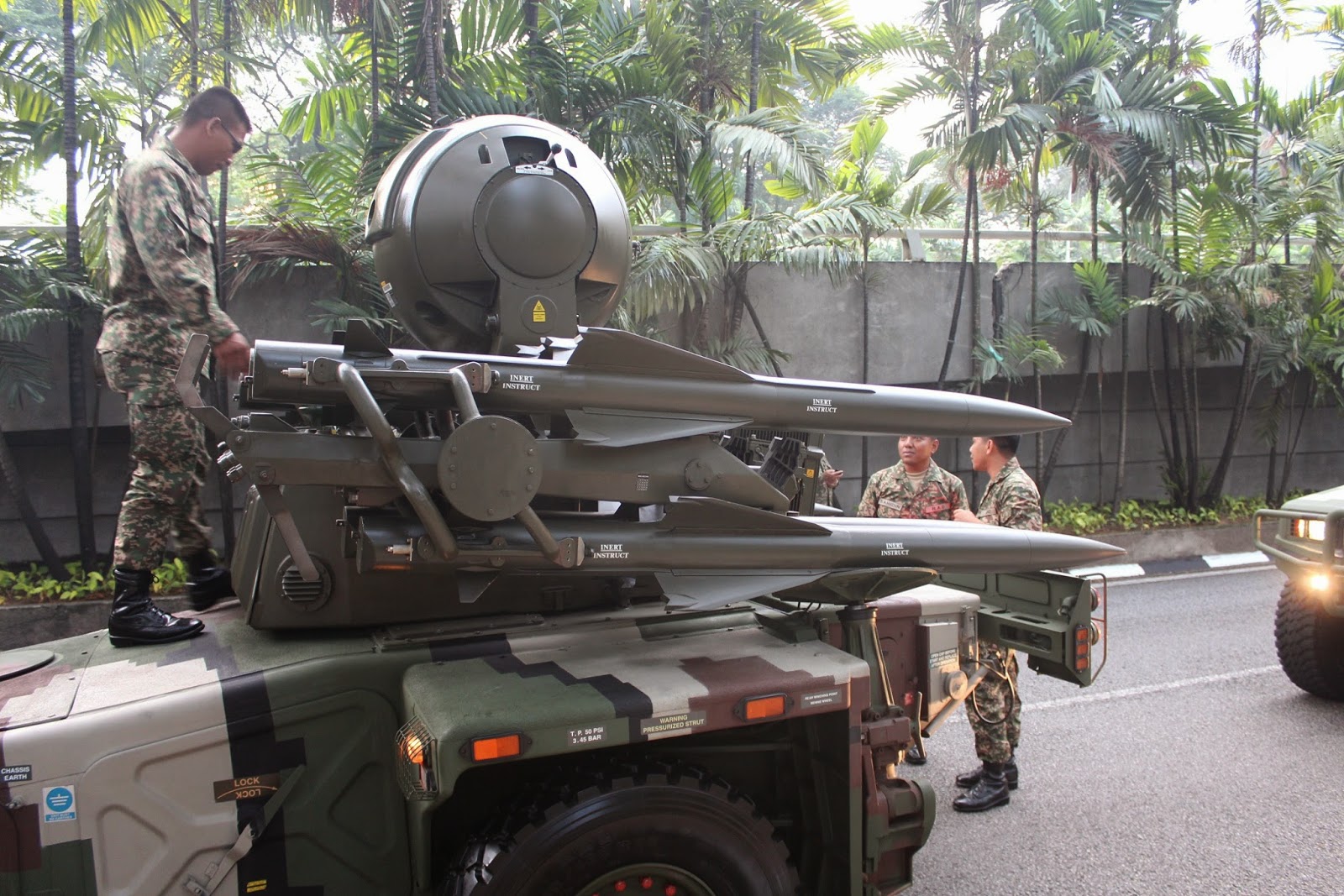 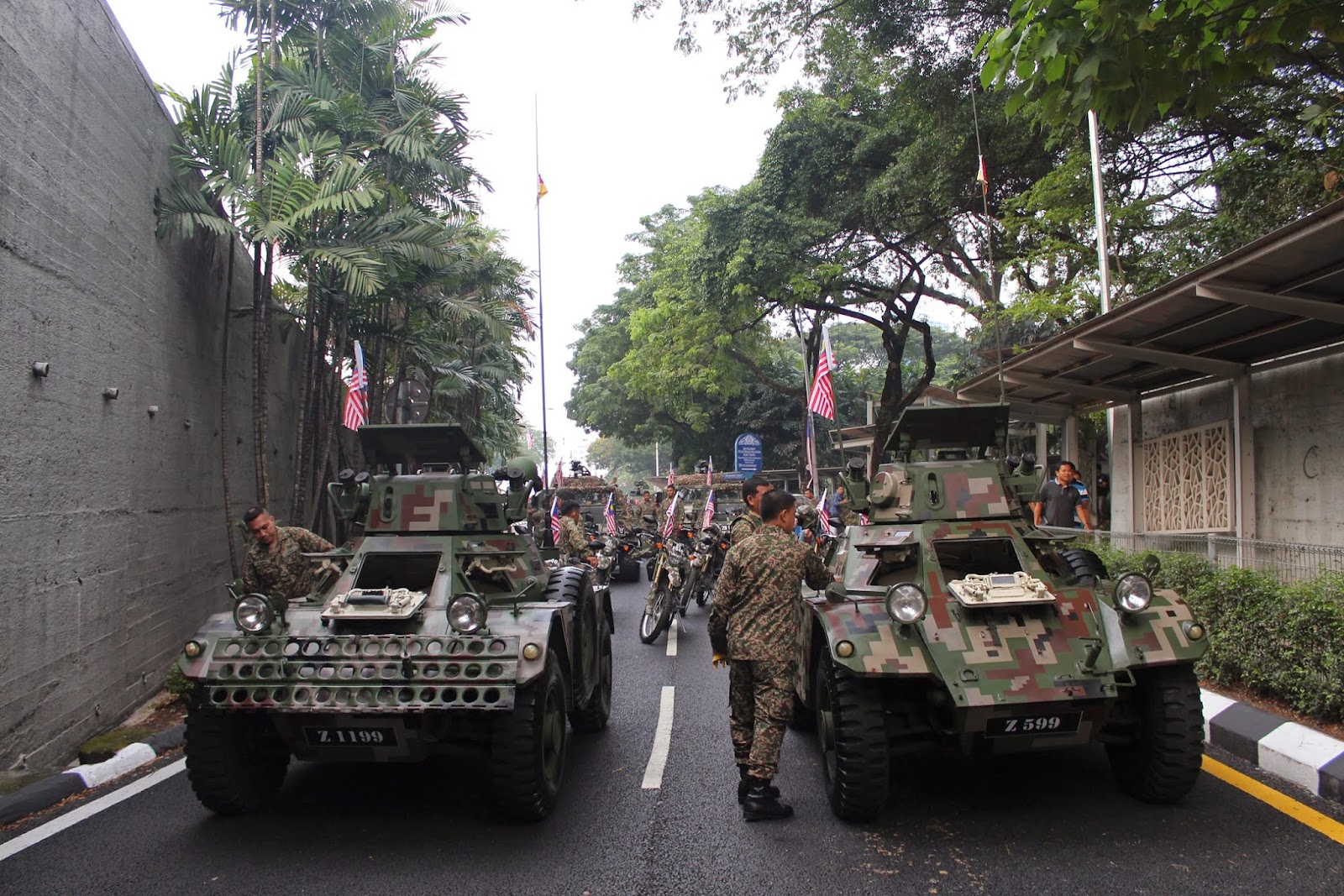 Managed to find myself a spot amongst the huge crowds right here... 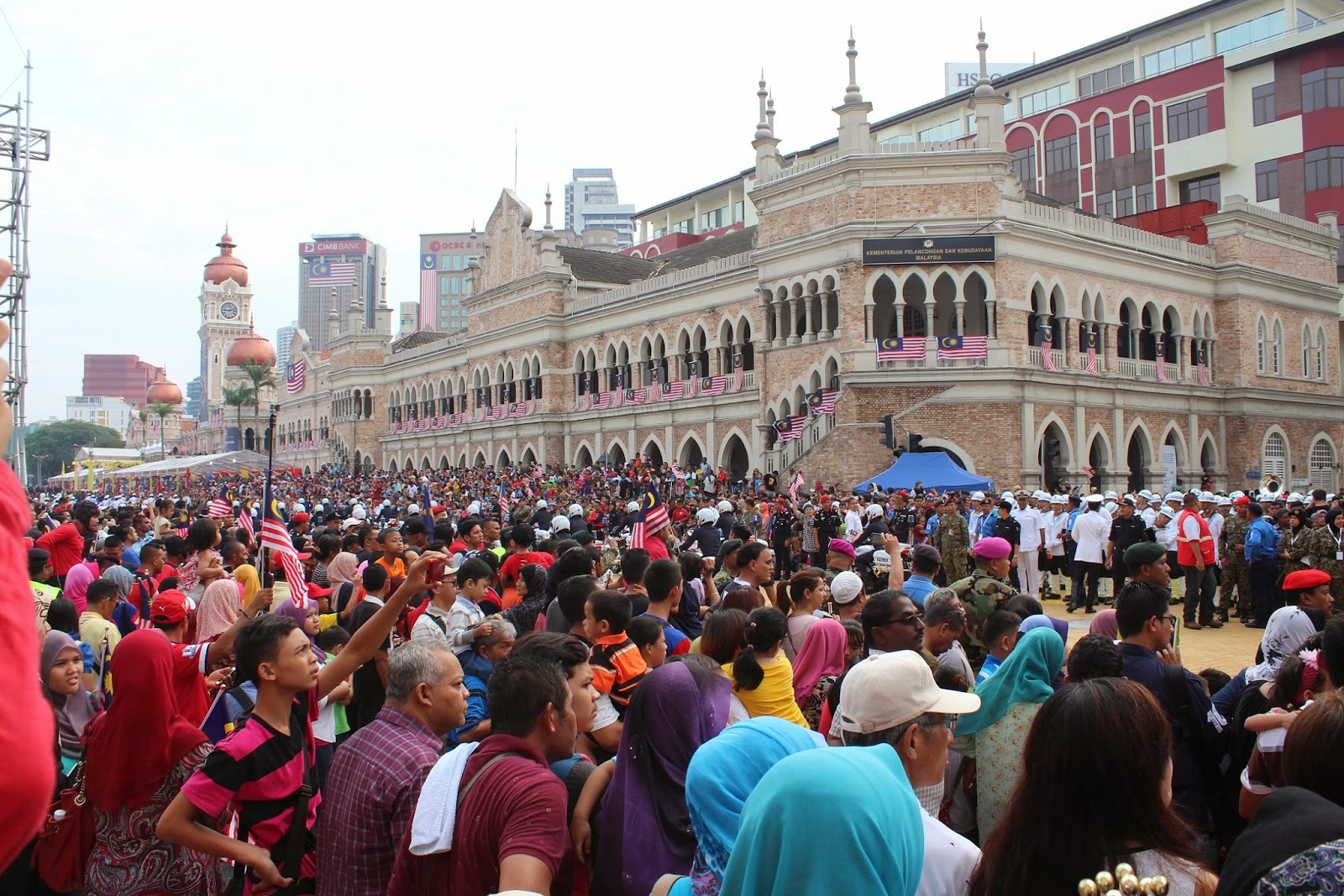 A number of national songs were blasted out of the speakers right behind where I was standing, including 'Negaraku'  and one of my personal favourites, 'Jalur Gemilang,' which I was able to sing along to. Despite the large crowds, there was no pushing and shoving, everyone seemed to behave themselves well, and the police did a very good job at maintaining order. I must say, it was a very patriotic atmosphere, and I felt very much Malaysian myself, and a deep sense of belonging to this land. 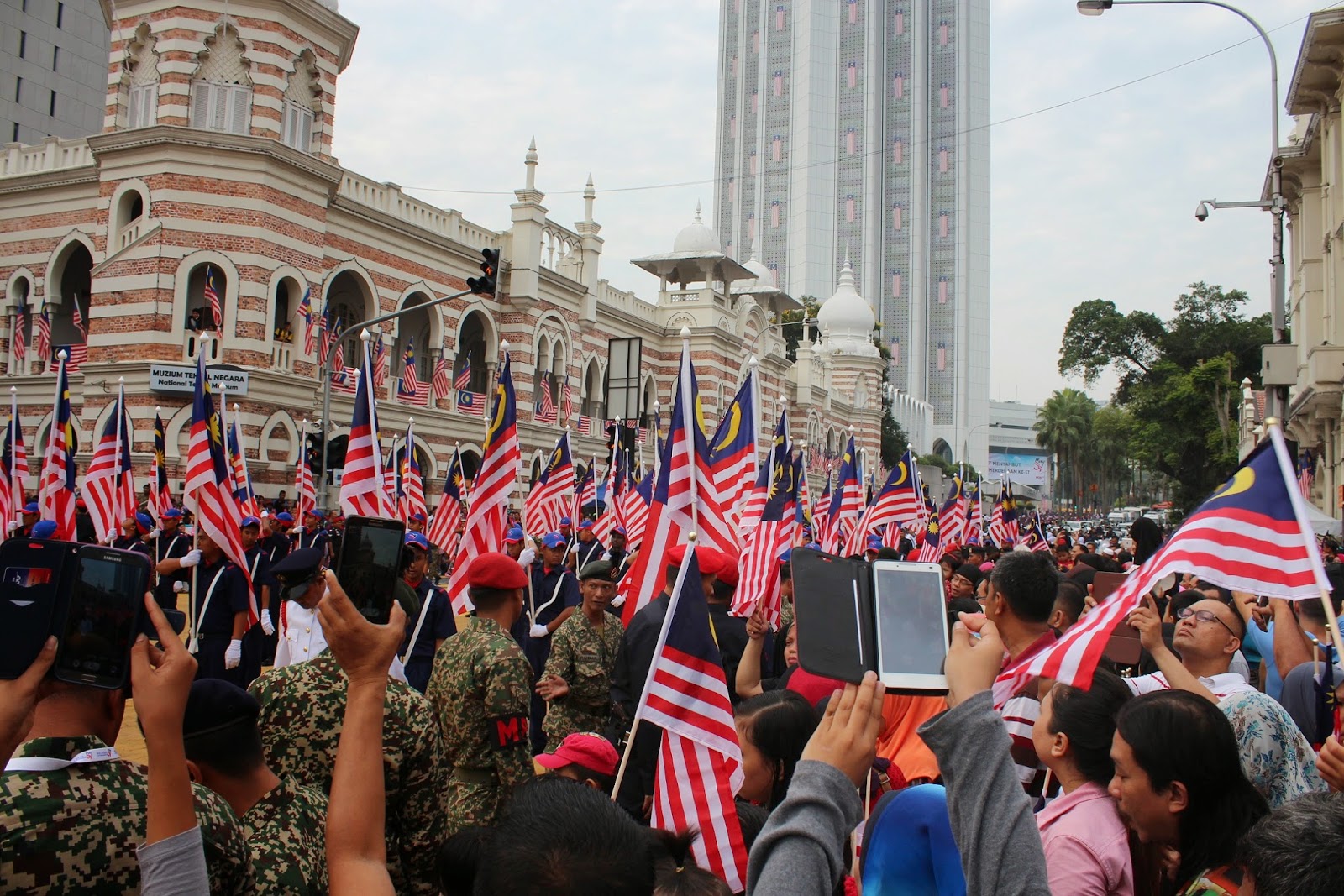 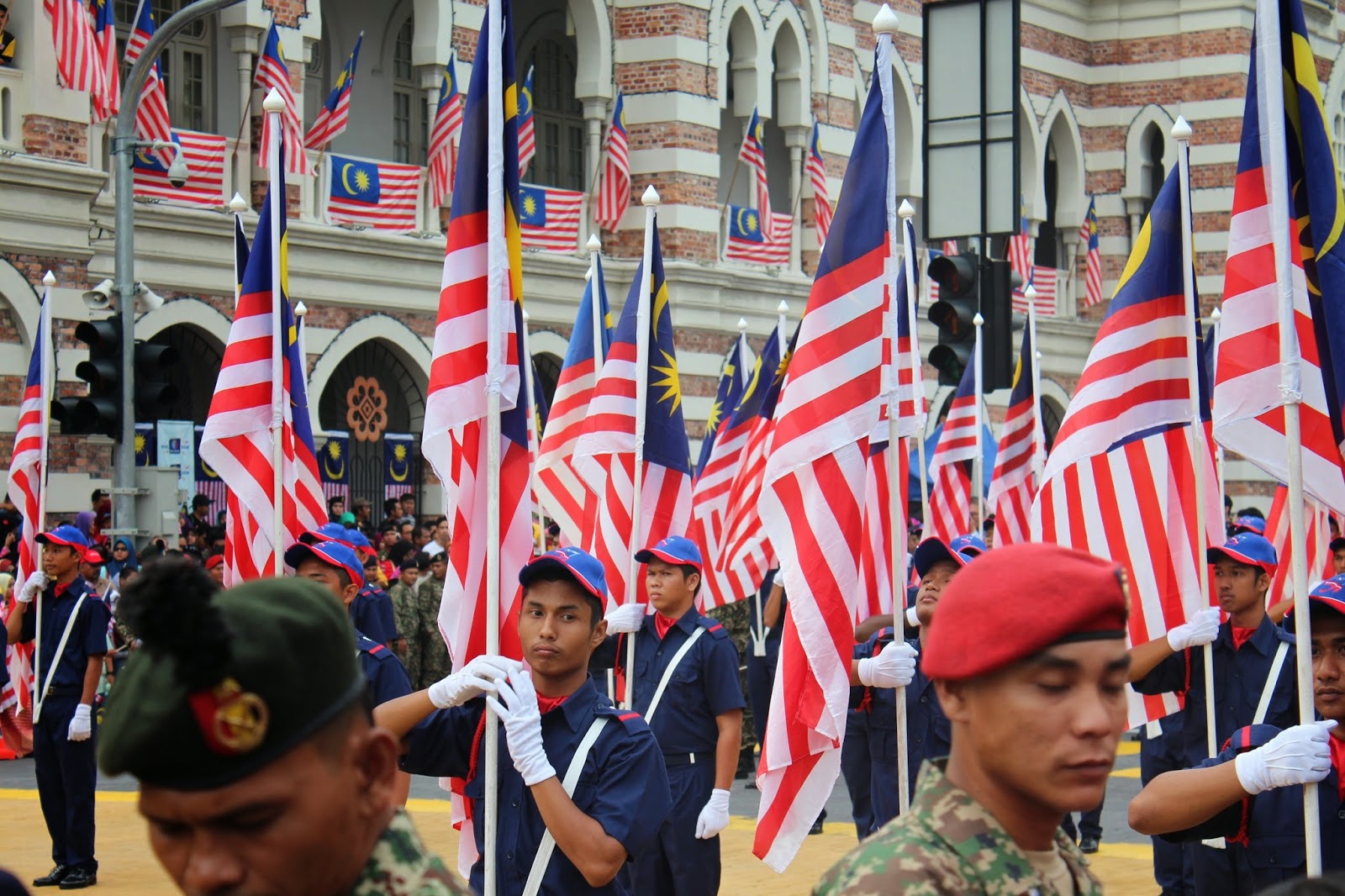 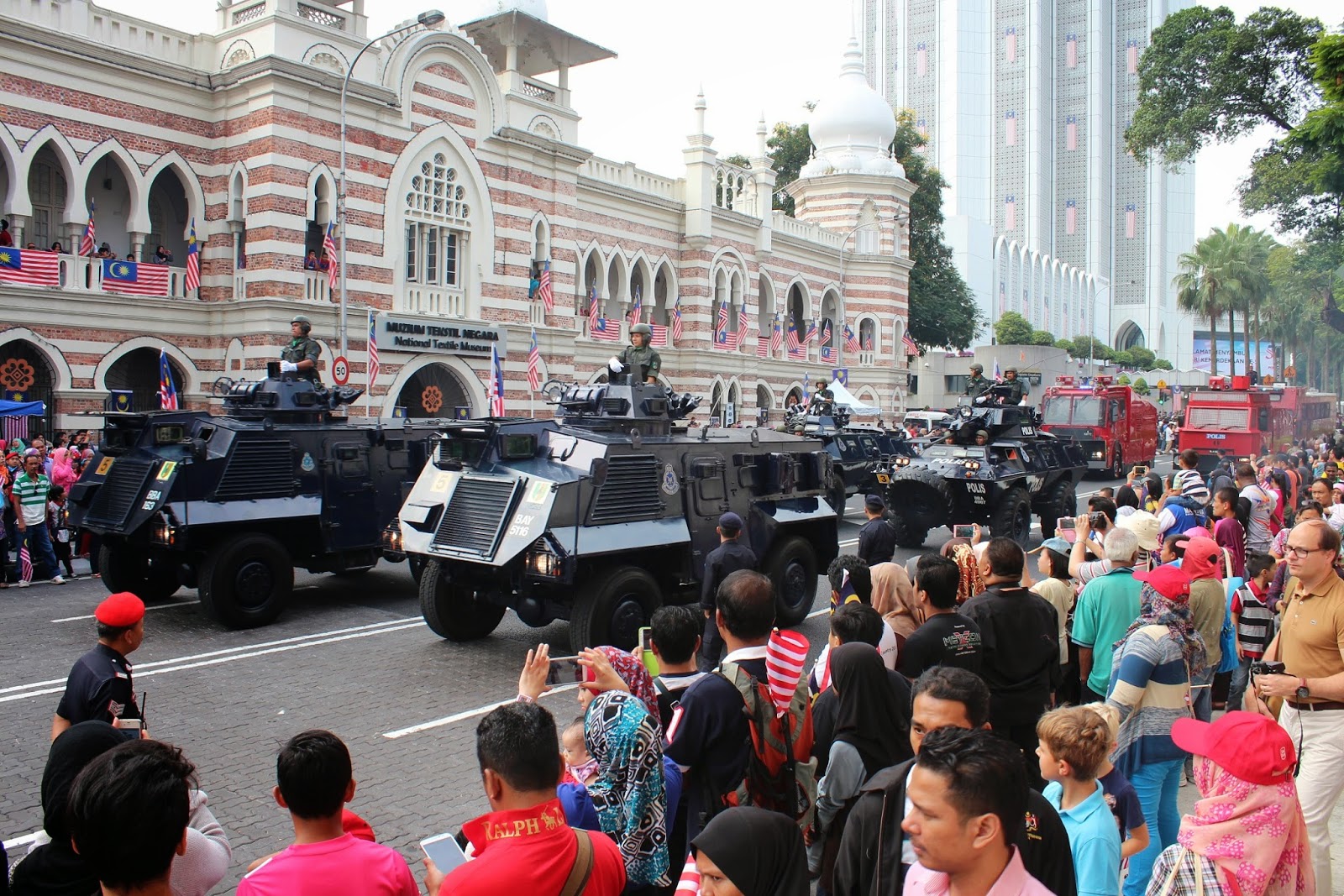 I was given a Malaysia flag which I waved proudly during the 'Jalur Gemilang' song. As I already was carrying an ipad and a camera, I ended up inserting the flagstick in my pocket, as many others did. 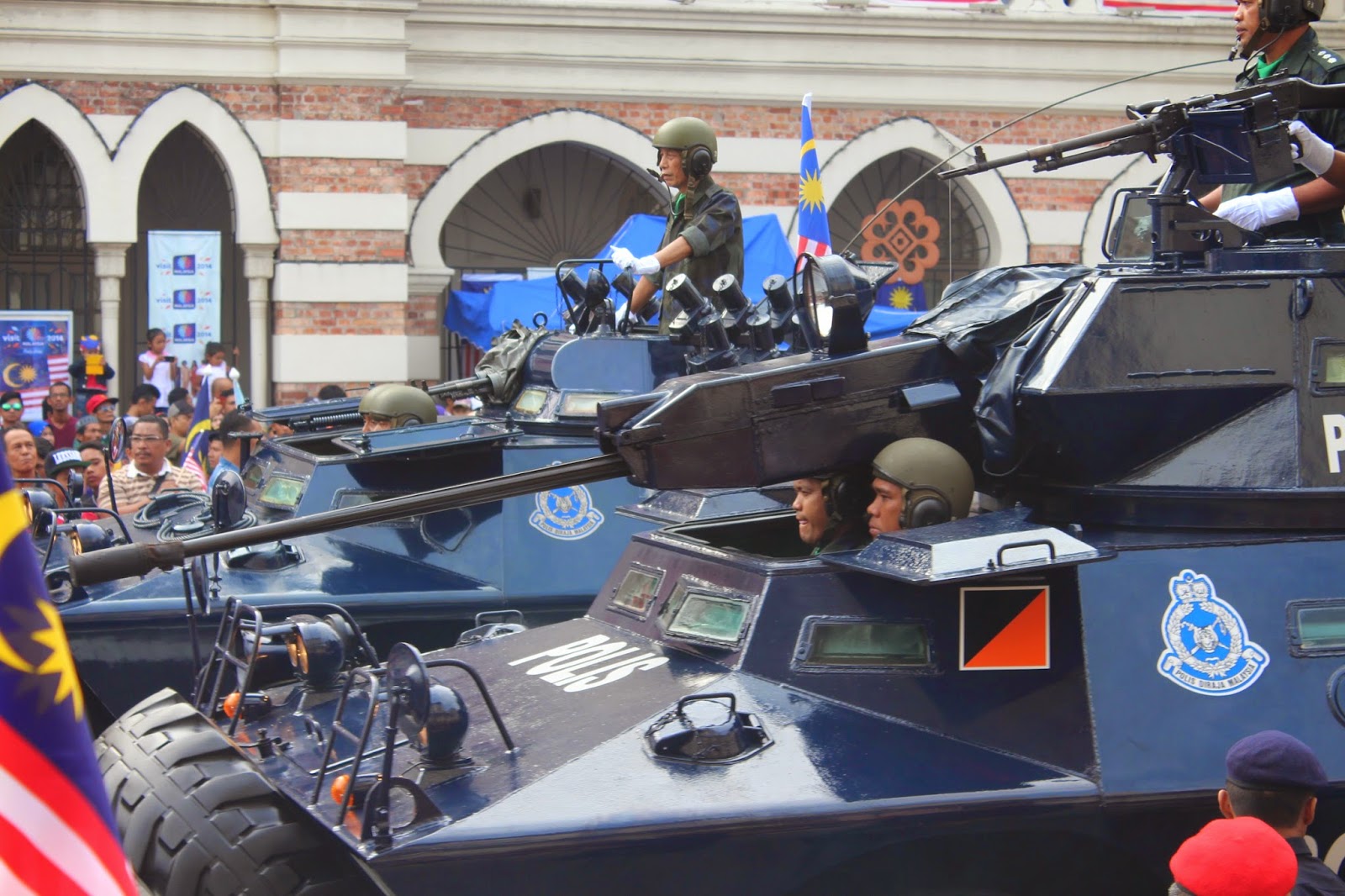 Managed to find a window ledge to stand on which gave me a better view of proceedings and a more favourable angle for taking photos. 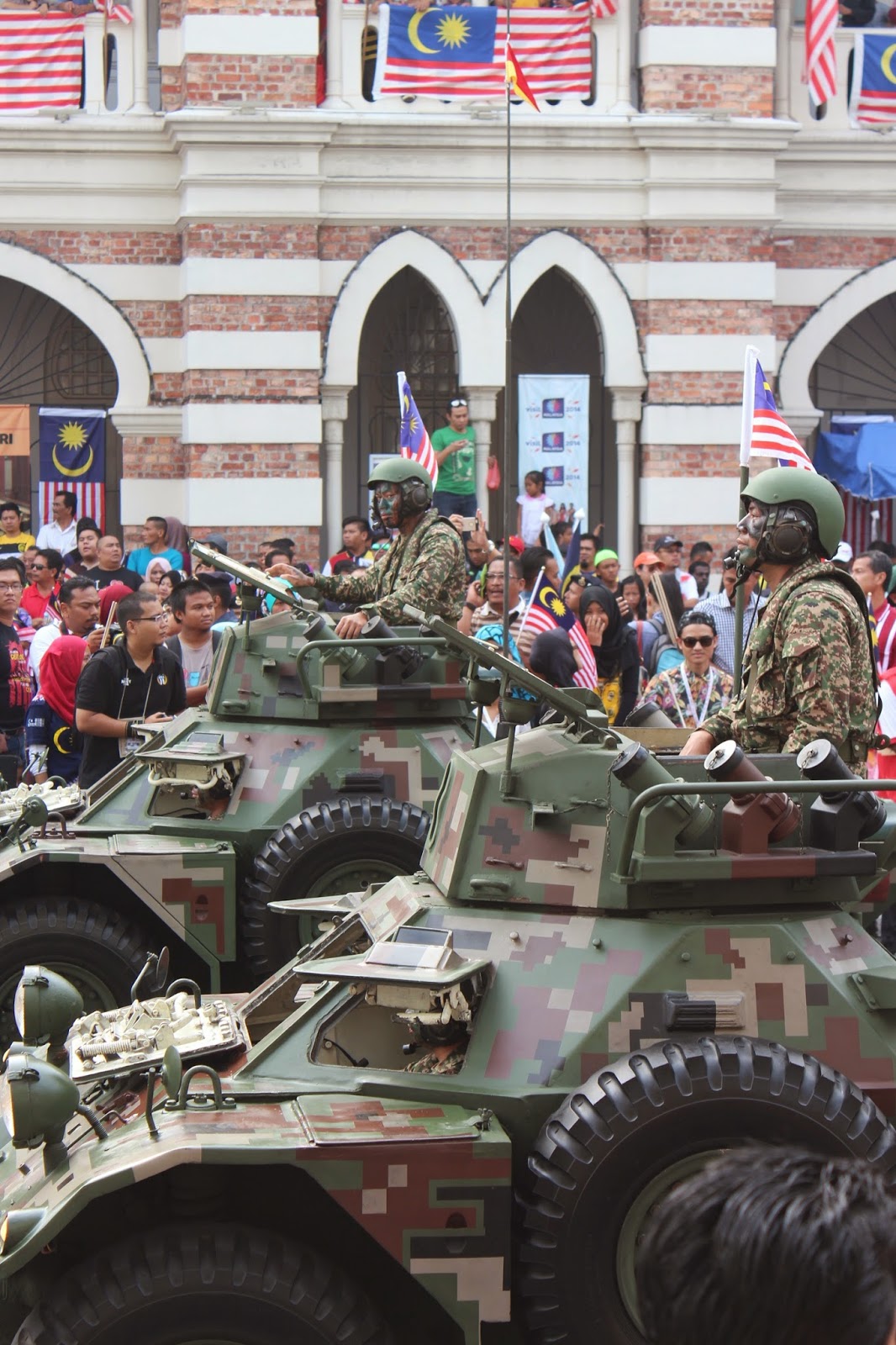 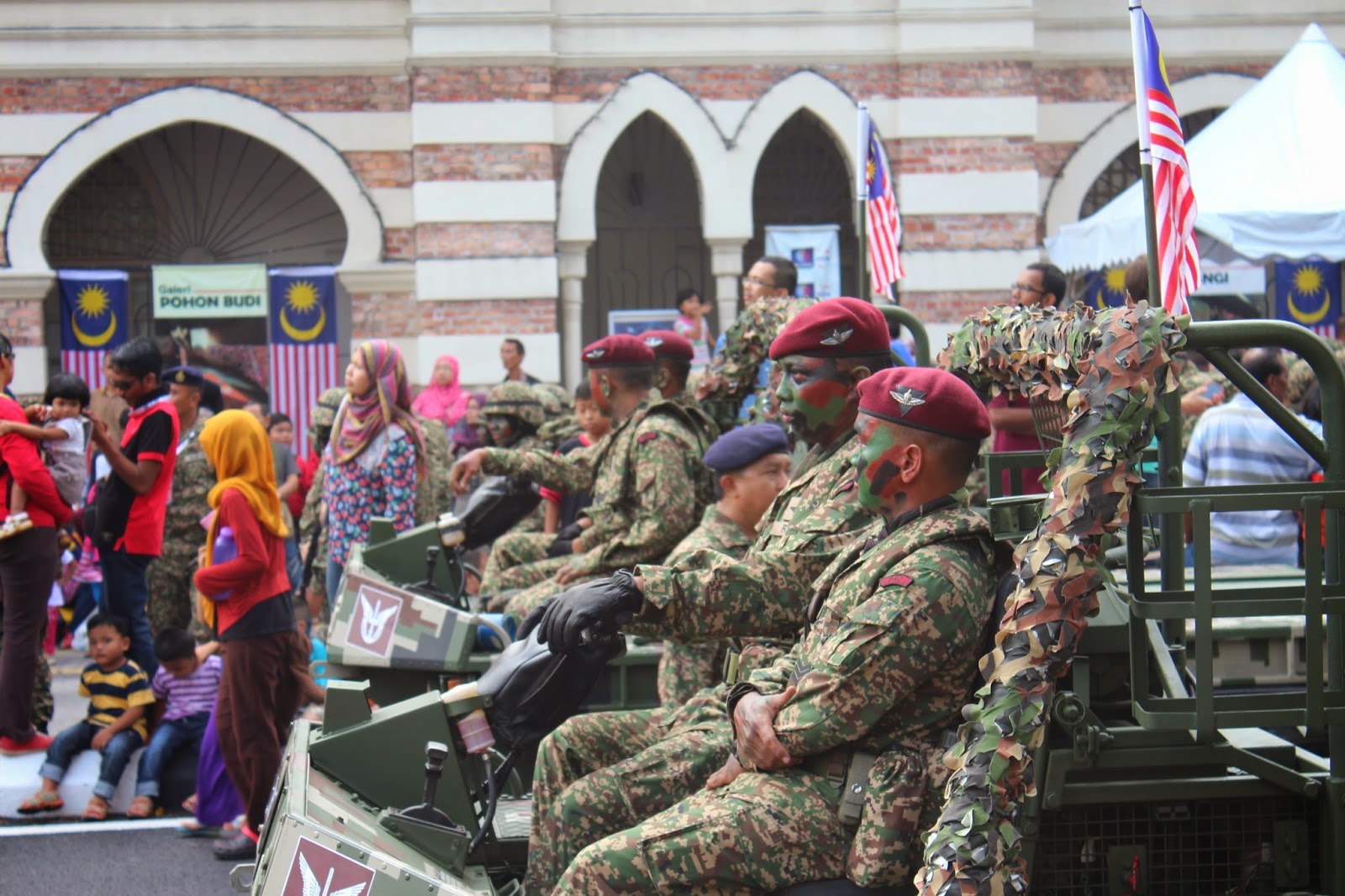 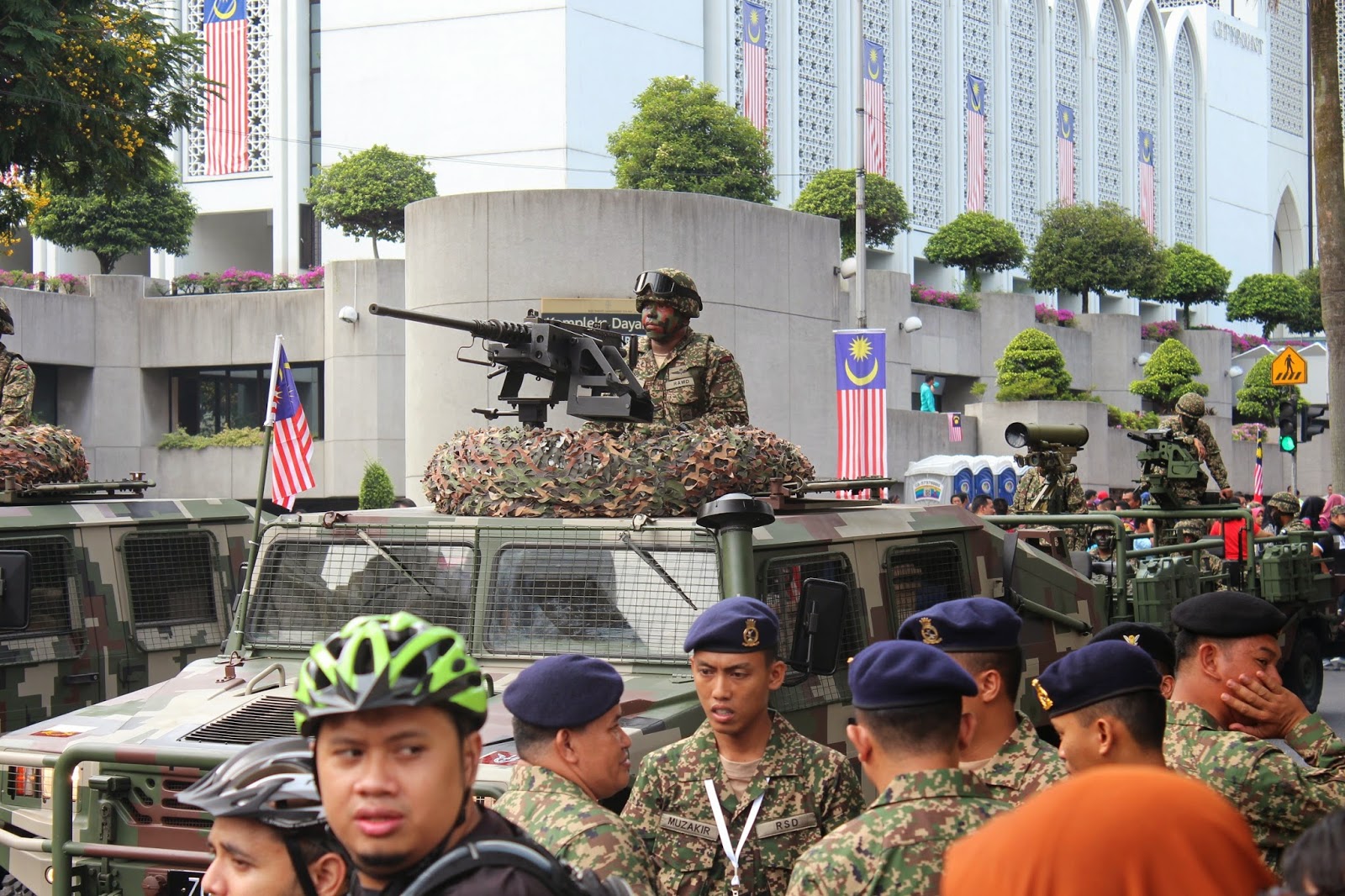 Around 9:30am I began to make my way through the crowds and headed back to the hotel. I was getting rather hungry!


I walked the slightly uphill journey back to The Majestic Hotel and slipped into Contango to join my family who were having breakfast there.

Top 10 things Malaysia has Given Me 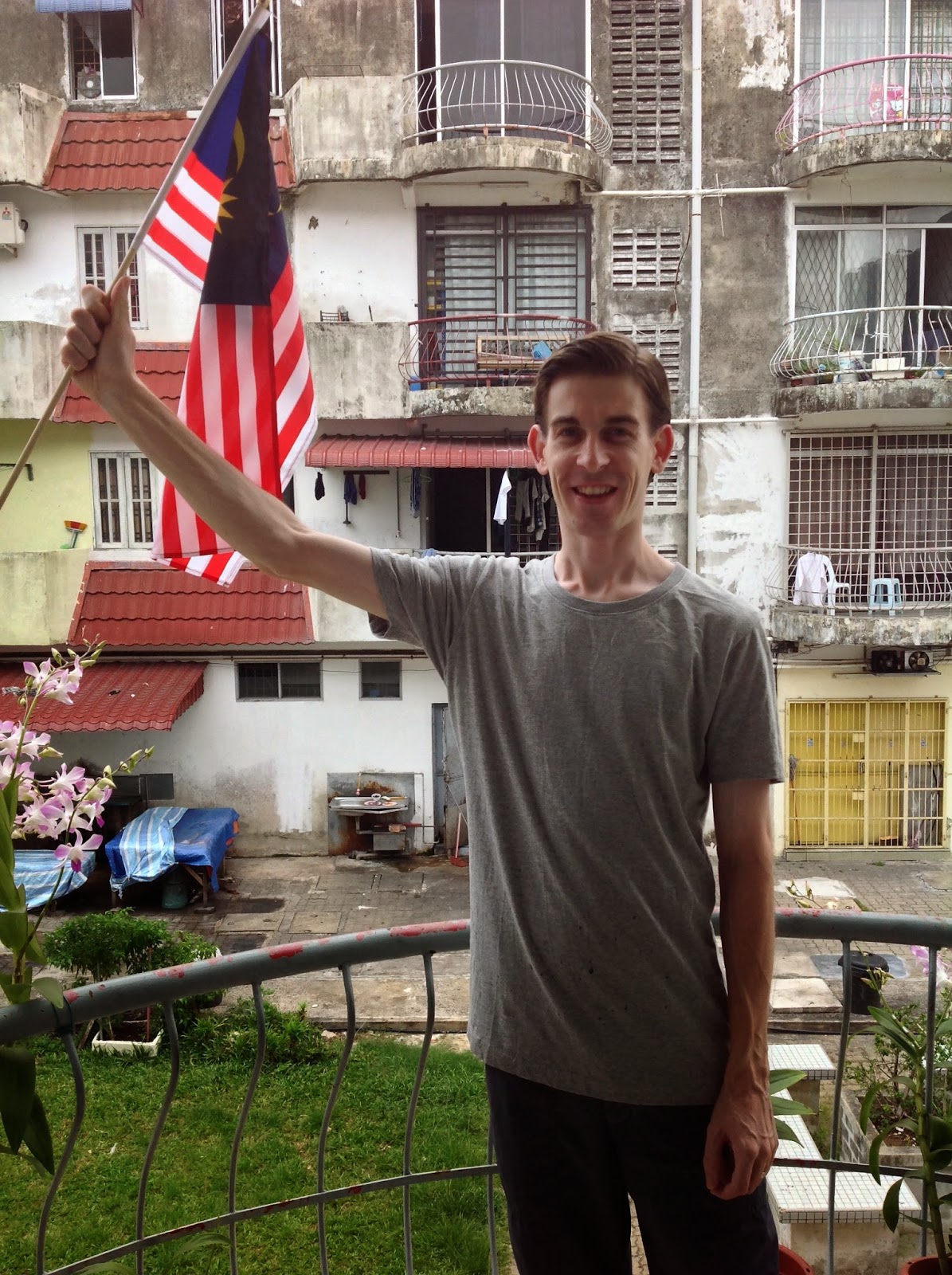 September 16th is Malaysia Day and is not to be confused with Merdeka Day (Aug 31st). Merdeka Day celebrates Malaya's independence from British rule in 1957. Malaysia Day acknowledges the merging of Sarawak and Sabah with Malaya, becoming Malaysia.

People here may go on holidays either in or out of the country, particularly if it coincides with a school holiday week. Or, people flock to the nearest shopping mall to spend the day, and money, on discounts!

Today I decided to spend some time thinking what Malaysia has given me and why I'm so thankful to be living here. So here is my

Top 10 things Malaysia has Given Me:

1. A beautiful wife and family
First and foremost, the reason why this Englishman is here in Malaysia today, is my beautiful wife. After meeting my Malaysian beauty on the island of Borneo, we soon engaged and married a year later. In addition to being the woman I love, she is a great help to my cause as a local Malaysian.

2. 4 sisters-in-law
Get that! Not only has Malaysia given me a gorgeous wife, but the family extends to four fantastic sisters-in-law (though I hate the 'in-law' part. I refer to them as simply 'sisters'). How lucky can one guy be?

3. A family company
Malaysia has given us our own family company. We registered Horne Learning Services through Suruhanjaya Syarikat Malaysia (SSM, or Malaysia Companies Commission), and in no time we had our own business. We are able to work from home, giving us the pleasure of being with and raising our children simultaneously. Our website can be found at HLS English Classes Kuantan

4. Long-term visa with permission to work 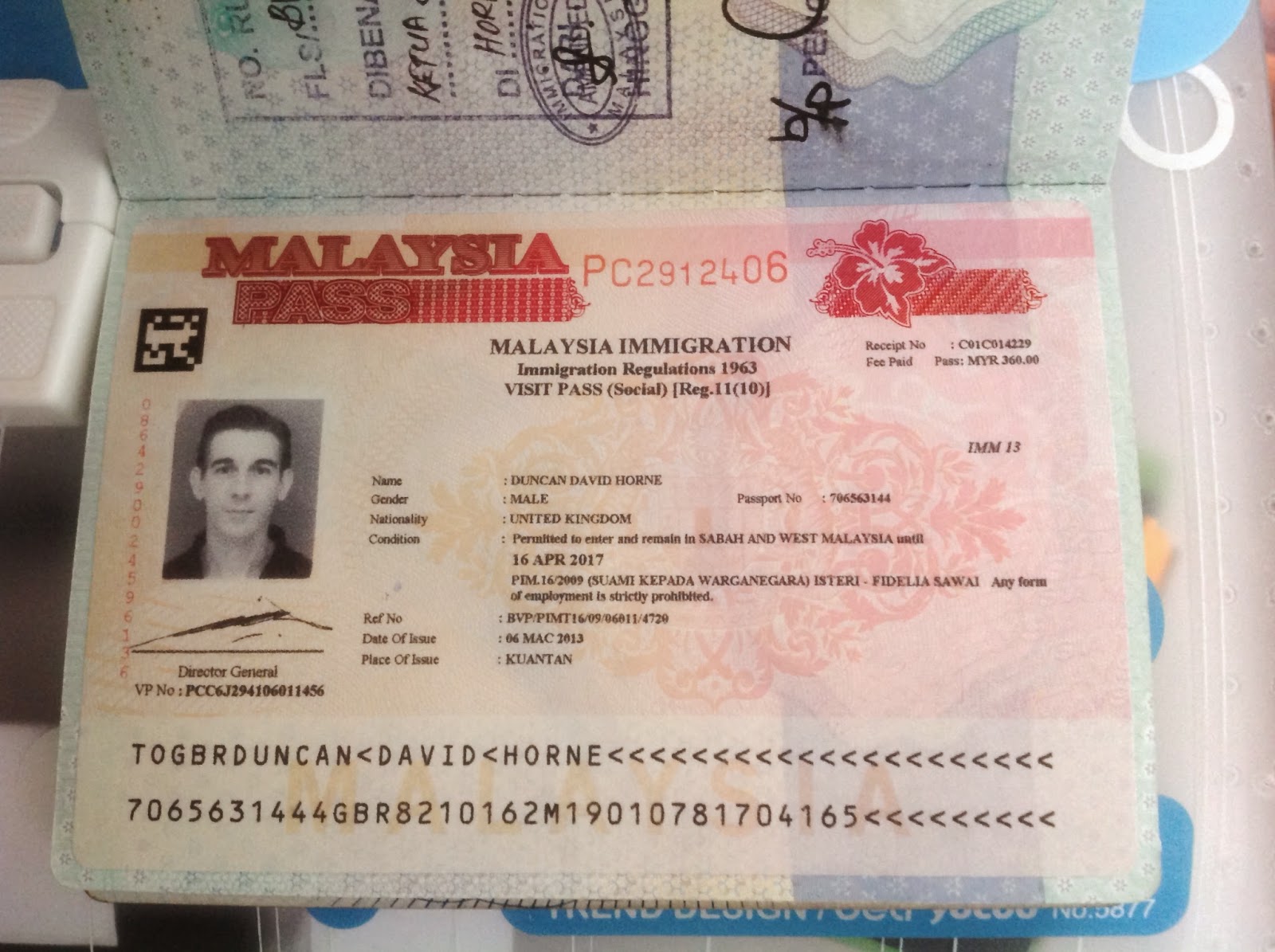 The Kuantan, Pahang Immigration has over the years relaxed its policies and has allowed me to receive a 4-year visa with permission to work. This is a huge blessing for me which I am ever grateful for. Long gone are the days where I had to go to Singapore every 3 months to get a new stamp in my passport. I am now working towards receiving PR (Permanent Residency) in Malaysia.

5. A love of hotels
Through my blog and living in Kuantan, I have developed quite a love of hotels, which has seen us stay inside most of the notable hotels in Kuantan, and some of the smaller ones. We have often stayed there for free in exchange for positive blog reviews, while also taking the opportunity of combining our English classes with the hotel industry. We have gained many new friends in hotels in Kuantan and KL which has enhanced our lives dramatically.

6. An appreciation of health
Malaysia has given me a more vivid awareness and appreciation of my health. Coming down with food poisoning has taught me to be extra careful what I eat and making sure it's clean and safe before consumption. Severe dehydration has alerted me to the need for drinking PLENTY of water and electrolytes, and also taking rehydration salts from time to time.

I have also started regular workouts at the local gym, to increase my health, strength and blood circulation. It feels fabulous to work out and eat right!


Living in this hot and humid climate has created a much greater importance to looking after my health. Coupled with my long-overdue dentist appointments to correct a number of problems at extremely low prices, Malaysia has definitely brought about an improved sense of good health.

7. A new outlook on life
Malaysia has reinvigorated me. It has given me a whole new outlook on life. It is a combination of living a different culture, adapting to a new climate, appreciating the appearance of the sun every single day, interacting with really friendly people, serving others and experiencing new opportunities. Thank you for these wonderful things, Malaysia!

9. Beautiful beaches
Malaysia has given me a beautiful beach just 15 minutes drive down the road. Teluk Chempedak beach is the most popular place in Kuantan. I love going there and walking across the bridge through monkey territory to the next beach. What a luxury this is!

Astro is the Malaysian equivalent of Sky TV in England. Man, I get to watch more EPL football in Malaysia than I ever did in England. There are 14 channels dedicated to sports, with additional channels on top of that for special sporting events (ie. FIFA World Cup, Olympics etc). Malaysia has spoilt me!